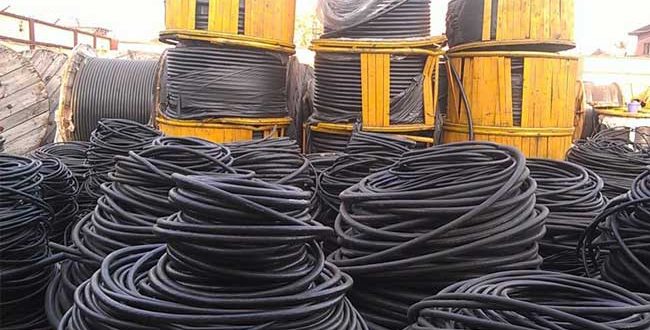 The N8 billion worth of counterfeited cables recently uncovered by the Standards Organisation of Nigeria (SON) at two warehouses in Ajagbandi area in Lagos State were actually manufactured in China, and made to look like made-in-Nigeria products, National Daily has gathered.

According to National Daily findings, the counterfeited cables which were allegedly imported by Estobest Electrical Limited were cloned to look exactly like leading Nigerian brands such as Nexans, Purechem and Coleman.

The Director, Inspectorate and Compliance, SON, Engr. Bede Obayi, during an enforcement exercise explained that should these goods find their way into the Nigerian ‎markets, it has the potential of starting an inferno when used.

“All these cloned-Nigerian cable were made in China, but being packaged as made-in-Nigeria products and you know we are proud of made-in-Nigeria cables, because it is about the ‎best cable over the world.”

According to him, the nefarious activities by some unscrupulous importers is killing manufacturing in the country. “Which company will survive when substandard products are taking over production capacities of local industries and with employment generation also being affected?

“We are already moving them out because we have to take them out of circulation, we cannot allow these‎ cables to enter the Nigerian markets and this is why we are evacuating them from the warehouses. We want to use this medium to send a stern warning to other importers who engage in this kind of illicit trade to say that there is no room for these kinds of trade in Nigeria.” ‎

He however advised Nigerian consumers to always ask questions before buying products, saying that ‎the qualities of these brands are not the same with certified brands while also adding that SON is not behind these brands.

Some of the established brands recovered from the operation include Coleman cables, Nexans, Purechem and other unbranded cables. He said the enforcement exercise is in line with the federal government’s quest to protect local industries from unfair competition against the influx of substandard goods.

According to him, SON has made some enviable progress in the nation’s cable market, saying that this is the reason why these importers go abroad ‎to clone Nigerian cables.

Share this on WhatsApp
Related Topics:Chinacounterfeited cablesStandards Organisation of Nigeria (SON)
Up Next