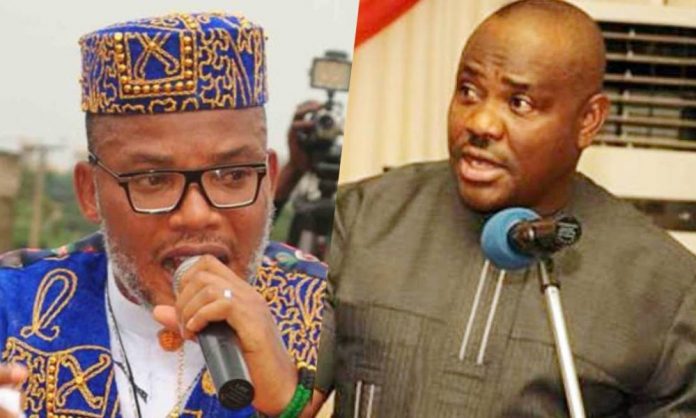 Governor Nyesom Wike of Rivers state has warned secessionists, including Indigenous People of Biafra (IPOB) to stay away from the state, stating that he would leave nothing to chance in protecting the state and its people against

Wike who stated this when traditional rulers, political and opinion leaders of Ekpeye nationality paid a solidarity visit to him at Government House, Port Harcourt on Tuesday, said those riding on the hospitality of the Rivers people to hatch their secessionist agenda must to take such clandestine activities elsewhere.

He said his administration would leave nothing to chance in protecting the state and its people against such persons who thought they could annex the state by dragging her into their separatist agenda.

“Rivers State does not belong to any other place. It is an autonomous State. Nobody in another State can come and tell us that we are with them, No. So, I will not allow anybody to enter this State to tell us that we are part of them. We will do everything we can to protect the interest of our State.

“We are a friendly people. We will allow anybody to come here and do business. But nobody should go beyond doing business to hoist unnecessary flags here. We will not take it,” he said.

The governor advised Ekpeye people not to leave anything to chance anymore, but to be vigilant to know what happened around and within their communities.

He urged them to report movements that they did not trust, that looked suspicious so that proper action could be taken to avert any possible attack.

There is no assurance of protection of life anymore. You owe it now to yourselves to protect your life. Be vigilant. When they say there is curfew, obey. It is for your own interest. Now that we have put that curfew, we are watching how the crime rate is going down,” he added.