Wife of the Governor of Lagos State, Mrs. Bolanle Ambode, on Thursday, reiterated that the State Government would not relent in its efforts at improving the fortunes of women in the state regardless of their social, political or religious affiliations.
Mrs. Ambode, who spoke at the 2017 WAPA Connect Conference, organized by the Ministry of Women Affairs and Poverty Alleviation (WAPA) held at Oregun, Ikeja, said that economic empowerment of women was crucial to poverty alleviation and domestic harmony, adding that there must be continuous interventions to address issues affecting women.
Mrs. Ambode noted that the conference theme, “Fostering Domestic Harmony Through Multi Perspective Analysis and Graphic Display Entrepreneurship in the 21st Century”, was in line with current realities.
She said the State Government believed that women must galvanize all efforts towards accelerating economic empowerment, stressing that all hands must be on deck, and steps taken towards achieving gender equality and inclusive governance.
According to her, “Lagos State Government believes that we must galvanize all efforts towards accelerating economic empowerment of women, and all hands must be on deck, as we take steps towards gender equality and inclusive governance”.
“The State Government has embarked on different initiatives to ensure financial independence for women, which is critical to taking charge of their own lives”, she stressed.
She disclosed further that, the state government through the ministry of Wealth Creation, had set up Lagos State Employment Trust Fund (LSETF), to promote entrepreneurial activities powered by young persons, adding the first phase of funds disbursement has been implemented.
The Governor’s wife urged participants to pay attention, as information that would be provided at the conference, would greatly assist women to take steps, and speak out towards eliminating domestic violence and gender-based discrimination in the society.
Earlier in her welcome address, Commissioner for Women Affairs and Poverty Alleviation, Hon. Lola Akande, said the conference was meant to project the evil effects of domestic violence on women and children, as well as teach the women strategies for safeguarding themselves and getting help in event of an occurrence.
According to her, “Research has shown that witnessing family violence in childhood is associated with a greater likelihood that sons and daughters will be either perpetrators on victims of violence. These findings reinforce the message that violence is a learned behavior and the inter-generational transmission of violence is an injurious cost to society, the economy and our moral fabric”. 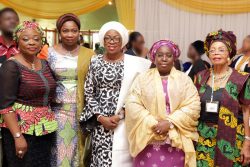 She said the ministry had taken critical steps and made interventions towards ending gender-based violence, including organizing enlightenment programmes, marital dispute mediations, assistance to and rehabilitation of battered women and empowerment, among others.
State Governor, Mr. Akinwunmi Ambode, who also spoke through his deputy, Dr. (Mrs.) Idiat Adebule, listed the various steps taken by his administration to stamp out gender-based violence in the state.
Among those in attendance at the event include prominent women politicians, entrepreneurs and top public servants in the State.