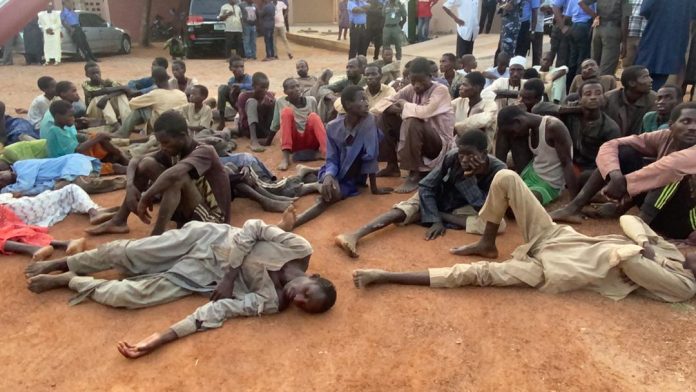 By the time Iklima Muratala and over 200 victims police rescued from Zamfara forest got to Gusau , now fewer than 19 of them died of exhaustion and starvation.

The survivors said they lived on grass for 52 days when the bandits ran out of food.

“When they took us to their place, they gave us food for only few days and later stopped supplying the food. We were left with no option but to begin eating some eatable grasses in order to survive,” she told the Punch.

“Seventeen of us died and even when we were brought to Gusau two people also died.”

The military authorities and the state government decided to block sources of sustenance and supplies to the bandits while military operations go on.

The Police Tactical operatives in a Joint operations at Tsibiri Forest in Maradun LGA rescue the victims abducted in Rini village of Bakura LGA, Gora village of Maradun LGA, Sabon Birni village and Shinkafi in Shinkafi LGA respectively, a release by the state police command stated.

Secretary to the State Government, Alhaji Kabiru Balarabe, said the pressure on the bandits will mount further until they finally give up.

The state Commissioner of Police, Ayuba Elkana, noted that due to pressure and lack of food, bandits were finding it very hard to operate.

“They are finding it extremely difficult now to carry out their activities because we have blocked all the ways they get food,” Elkana said.