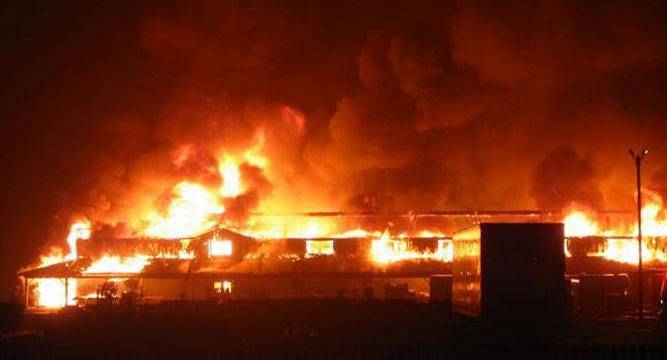 Share this on WhatsApp
Spread the love
At least three people were killed while two houses and a car were burnt early Monday as party goers clashed at a birthday bash in Bauchi, police said.
The police said a minor disagreement at the birthday party soon snowballed into violence.
Witnesses at Yelwa area of Bauchi state said their sleep was disrupted when they began to hear shootings at about 1a.m. that night.
“The shooting was deafening and it lasted for hours as we heard footsteps of people running,” said a trader who only introduced himself as Mr. Mathew.
“The shootings, which we later came to understand was from the soldiers and policemen deployed to quell the fracas, lasted till dawn.
“We learnt some lives were lost in the fight,” he said.
The police public relations officer, Kamal Datti, said that 75 person have so far been arrested in connection with the incident.
Mr. Datti, a deputy superintendent of police, confirmed that lives were lost in the fracas.
“What actually happened was that yesterday, in the night, some group of persons were celebrating at a birthday party at Lushi area, during which they had a misunderstanding, and in the process a fight erupted among them,” he said.
“As a result of the fight three people were killed, two houses and a car were burnt, while five persons were injured.
Mr. Datti denied the incident had religious undertone.
“What the police want to make clear about this incident is that it is not a religious crisis as it is already been tagged and reported,” he said.
“It is just a fight amongst some group of people and it started from a birthday party.”
He said the police had been fully mobilised to monitor the area to avert possible escalation.
“The situation has been put under control and people are already going about their normal businesses, even though our personnel and that of other security agencies are still on ground monitoring the situation.
“We have fortified the area, and we are already investigating the incident. So far 75 suspects have so far been arrested by the police,” he said.
Although there was no curfew imposed in the area, the residents of Yelwa district comprising Yelwa-Tudu, Yelwa Tsakani and Nguwan-gas were mostly indoors as they embarked on self-imposed curfew for fear of the unknown.
Most businesses in the crowded commercial area were not opened. Commercial motorcyclists would not take passenger beyond the Yelwa market junction that leads into the affected area.
A female witness who would not want her name mentioned in this report gave an account of how the attack happened.
“It was a mere kids birthday party that took place in Laushi near the mobile Telecom mast,” she said.
“Suddenly, they began to enter people’s houses. At the first house they entered, they rounded up the man and hacked him to death using cutlasses and knives. After that, they set the house on fire.
“The second house that was burnt was even more pathetic. When they were advancing towards the house some neighbours went and alerted the man who quickly moved his family and children out on time to a family friend’s house.
“But sadly, the man returned to the house to stay. He locked himself up and attackers came to set fire on the houses burning him alive till he died.
“The third man that was killed was on a bike when they stopped him and began to beat him up. They poured petrol on him and set him ablaze,” said the woman who had just returned from the police station where she said her younger brother who knew nothing about the fight was being detained.
Several women, mostly wives or mothers of the 75 arrested suspects in connection with the incident, stormed Yelwa police station to protest what they described as illegal arrest and detention of their family members by the police.
The women said those picked by the police were innocent of the crime they were being accused.
Share this on WhatsApp
Related Topics:House burning
Up Next