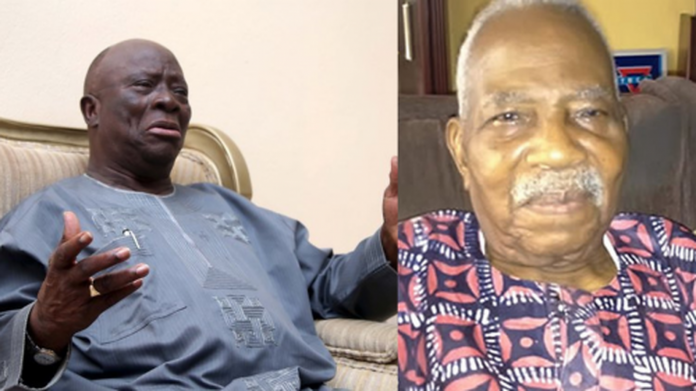 Following the recent appointment of Afenifere’s new leader Ayo Adebanjo, and the death of its publicity secretary Yinka Odumakin, the group’s immediate past leader Pa Reuben Fasoranti has endorsed the 2023 ambition of the APC leader Bola Tinubu.

Tinubu, however, was a no-no, a sell-out, as far as Odumakin was concerned; and he’s worse than a betrayer as far as Adebanjo knows.

With these divergent opinions, it’s hard to believe whether the group truly represents the Yoruba interest.

Or perhaps everyone is entitled to their own opinion within the group, though it’s obviously political, considering its unflinching support for the PDP in 2014 and 2019.

Whichever, Fasoranti’s opinion of Tinubu rises to the high heavens.

The nonagenarian revealed this while receiving members of the South West Agenda for Asiwaju Bola Ahmed Tinubu, SWAGA 23, in Akure, the Ondo State capital.

According to the Afenifere leader, with Tinubu as president, all the prayers of Afenifere for Nigeria would be answered, particularly the issue of restructuring and federalism.

The National Chairman of SWAGA, Senator Dayo Adeyeye, said Tinubu is a part of Afenifere, and the APC leader will listen to the yearnings of the group.

The group, now led by Adebanjo, insist I restructuring Nigeria, and he believe neither Tinubu nor President Muhammadu Buhari is sincere enough to do that.

:Buhari is deceiving Tinubu, and Tinubu is deceiving Buhari,” Adebanjo says every time he answers a question about Tinubu and the 2023 presidency.