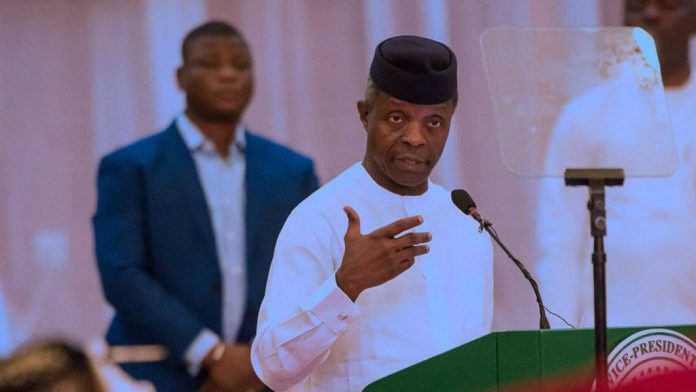 The Progressive Consolidation Group is a political platform rooting for V.P. Yemi Osinbajo as a likely candidate of the APC in th 2023 presidential election.

There are other group too doing barnstorming across the north.

But they have not been lucky with many of the governors they have met so far.

Katsina Gov Amiu Masari told them off, saying they should sell the party first.

Others too have deflected the questions of the governors’ choice.

But Governor Abdullahi Sule of Nasarawa  has said the APC would support the presidential ambition of the Vice President, Yemi Osinbajo—if he declares interest to contest for the president in 2023.

He told the the Progressives Consolidation Group  in Lafia, the state capital on Monday.

According to him, described Osinbajo as a very sellable candidate for the APC.

“Our concern is how we will sustain the party beyond President Buhari. So, if you come up with the idea, you know you will not only get my attention but the attention of every progressive governor in the country,” he said.

“So, if you are going about to sell this man, I want you to know that not every product is sellable but Osinbajo is sellable.

“I pray that all the work you are doing now will not be in vain. It will be good for our party and the progress of this country.”

Some northern senators, including the one representing Nasarawa has said there’s no law backing rotating the presidency to the south in 2023.