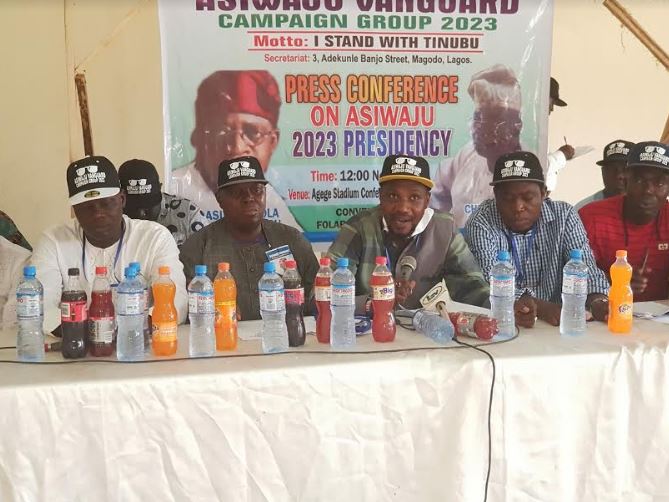 Share this on WhatsApp
Spread the love
By Olanrewaju Adesanya

A group of democrats have stated resolve to galvanize support for Asiwaju Bola Ahmed Tinubu,the National Leader of All Progressives Congress (APC) in presidential bid ahead of 2023.

The group Asiwaju Vanguard Campaign Group 2023,officially joins the teeming support groups canvassing for Tinubu’s aspiration,declaring an irrevocable poise to galvanize political loyalists for the vision across the country.
The group’s National Coordinator Mr. Folarin Adekanbi at a press parley held in Lagos, appraised the contributions of the political icon,citing his unmatched qualities as a detribalized human capacity builder.
According to Adekanbi,the group with visible spreads in all the geopolitical zones of the country will passionately influence political view of Nigerians towards massively ensuring Tinubu become the nation’s president come 2023.
“We irrevocably stand with our national leader,Asiwaju Bola Ahmed Tinubu as President of Nigeria come 2023,no retreat no surrender.
“His antecedent shows the stuff he is made of as exemplified in Lagos where he groomed so many leaders,the likes of our Vice President Professor Yemi Osibanjo and many more.
“Given his experience,maturity fear of God and passion towards human capital development,that is the kind of President Nigeria needs now,not mansion builders but builder of people.” Adekanbi affirms.
Speaking on the sideline,the group’s Southwest National Coordinator, Hon.Femi Olowole (AKA Denmark),who also spoke glowingly about the resourcefulness and proactive attributes of Tinubu, urged all to team up and ensure he becomes Nigeria’s next president. 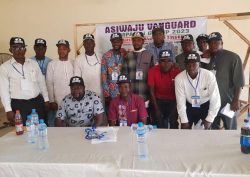 Olowole said,” He is a bridge builder,a man that has compassion,a tested and trusted democrat,we believe that he is a man that has shown so much love to this country.
“If anybody believes in the sovereignty of this country such can always come on board to be the President of this nation.
Olowole along with members of the group all adorning a cap with bold inscriptions that attest to maintained that Tinubu’s presidency is not a dream but a reality.
“That is why we have all resolved to irrevocably through all the geopolitical networks across the country,that come 2023 we shall mobilize extensively to ensure he becomes the President of this country.
“People should come out enmasse they don’t have any other messiah than Asiwaju come 2023,everyone of us should think outside the box,he is God sent.”Olowole reiterated.
Share this on WhatsApp