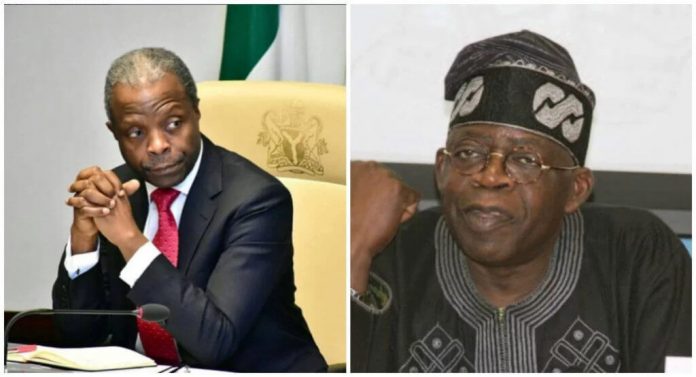 As Bola Tinubu’s Southwest Agenda for Asiwaju keeps stirring the southwest and building support bases, the Progressive Consolidation Group begging V.P. Yemi Osinbajo to contest has taken a big leap in pushing their own candidate too.

The PCG claimed it has gotten a formal recognition from the APC national headquarters.

Mr Bala Gide, leader of the Progressive Civil Society Group (PCSG), one of the sub-groups under the PCG, said in a statement on Sunday in Abuja, that the recognition further justified optimism towards the realisation of an Osinbajo Presidency in 2023.

He said the “Letter of Recognition as Support Group” the headquarters issued formally made the pro-Osinbajo PCG the first 2023 presidential mobilisation group to be granted such privilege by the party.

Gide also applauded the forthrightness of the APC and it Caretaker and Extra-ordinary Convention Planning Committee (CECPC) led by Gov. Mai Mala Buni of Yobe.

“Rumour mongers should please desist from their wanton disregard for the solid democratic and progressive credentials of Osinbajo and other potential candidates who may wish to come forward in the APC.

“Committed party members and other patriotic citizens would remain even more assured under an offshoot of the Buhari/Osinbajo Presidency headed by Prof. Osinbajo” he said.

Osinbajo has distanced himself from any support group rooting for him as Buhari’s successor.

Tinubu has yet to declare his intention either.