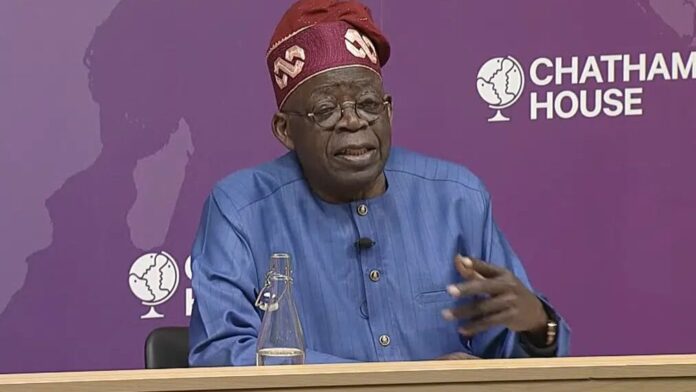 Chatham House, while trying to repackage and market Bola Ahmed Tinubu, ended up de-marketing itself. While trying, albeit strenuously, to rebrand Bola Ahmed Tinubu, Chatham House ended up eroding its own brand personae. Its brand equity went bearish like a bad stock cascading down the index on a bad day on the FTSE or the New York Stock Exchange. Tinubu’s handlers not only rubbished Chatham House, but also ridiculed the Nigeria nation and her peoples before the global community. At best, Tinubu’s Chatham House odyssey was a PR disaster! His legendary gaffes got amplified before a global audience who either watched the horrid display of Tinubu on Television or via LIVE streaming on the internet. Tinubu’s infamous, yet half-expected comedy of errors turned an otherwise revered platform into a “Chatham House of Horror” or (to bring the adjective nearer home), it was the “Chatham House of Commotion”.

One good thing though; while millions of Nigerians awaited another “bullaba blablabloo” verbal misadventure, the APC’s flag bearer (who is now more like a “flag stainer”) added more “words” (if you can call his trademark ramblings and incoherent, inchoate verbal defecations “words”) to an already swelling lexicon. Some of the new words were so incoherent that they cannot even be written down.

Tinubu on the Chatham house stage was like a caged pigeon that has been slammed by a pick axe. Was there a physician close by? Nobody needed an MRI scan to diagnose a man suffering from acute dementia. This is no exaggeration. Tinubu has consistently and persistently displayed signs of Amnesia, and Dementia: maybe a case of a progressively deteriorating Alzheimer’s (a degenerative brain disease that causes dementia). As defined by medical experts, Dementia often includes memory loss. It also often involves problems with thinking that leads to a decline in daily functioning. These problems include having trouble with language, judgment and visual-spatial skills. All these have been displayed in no little measure by Tinubu, day in and week out!

A few friends sat in my living room to watch yet another episode in Tinubu’s unedifying soap opera series. A handful of those who watched with me fell into fits of hard-to-control laughter each time Tinubu hits a new chord in his rhythm of mental and verbal misadventure. It was like watching a badly scripted “B”-rated movie or a sad melodrama. From all indications, Tinubu will compete well for comic ratings with Mr. Bean!

“Na Tinubu be dis? Jesu! Make dem save this man from himself na, I beg”, a friend quipped close by. As the audience jeered, and laughed, I could not join the laughter. I could barely watch the sad melancholic display of a man who, like ‘Elesin Oba’ in Wole Soyinka’s classic “Death and the King’s Horseman” , was too far gone in his hubristic decline. I watched a man who, in his self-effacing “emi lokan”, is now a husk. His aged shell is now a sad reminder of a man who once rode princely on a king’s horse. Sadly today, Tinubu now holds tenaciously to the horse’s tail, covered in the stench and smell of the horse’s faeces.

At the Chatham House of Commotion, the APC candidate repeatedly punted himself. He was the butt of his own comic satire. The Guest Speaker morphed into the Moderator, albeit to the embarrassing chagrin of a global audience. When Tinubu wasn’t parrying questions, he was delegating the task of answering them to subordinates and minions who are NOT on the presidential ballot! The Mephistophelean bunch of El Rufai, Dele Alake, Kayode Fayemi and their co-journeymen suddenly became presidential candidates by Tinubu’s singular substitution! And when he deferred to answer himself, he had to read his answers (including his date of birth) from hurriedly scribbled notes which were handed to him by another subordinate. All in the full glare of a global audience! What excuse do APC’s litany of propagandists and spinners have to explain away the actions of a man who had to read his own Date of Birth from a slip of paper handed to him! Such was Tinubu’s.

Age is not a crime. To age and grow old is the last curve on life’s graph. We all, if God grants, shall grow old.  Unfortunately, the All Progressives Congress (APC) are not a God-fearing bunch. With Tinubu, APC mocks God daily on the campaign trail. In Tinubu, APC challenges God. Daily, and agonizingly, APC brandishes the limitations that age forces on us all. They continue to “package” an octogenarian whose mental state and physical wellbeing are in obvious decline; whose gaffes and vituperations have become comic relief in a nation many have declared a failed state. They window-dress and wall-paper his thwacks as the messianic vituperations of a saviour. This is the worst disservice APC can mete out on a hapless fragile old man. Tinubu’s body is gone, his mental acuity eroded daily, wracked and ravaged by acute dementia.

The Chatham House scam highlights in no little measure one incontrovertible fact: Bola Ahmed Tinubu is not fit to occupy the exalted office of the President of the Federal Republic of Nigeria. As clearly stated in our Constitution, we cannot elect anyone adjudged… “or otherwise declared to be of unsound mind”. Evidentially, Tinubu has consistently displayed this unfortunate condition. If Buhari was bad, Tinubu is worse. To borrow the viral parlance on social media, “Tinubu is Buhari Pro Max”!

The February 2023 Presidential Elections will be a watershed moment for Nigeria and her peoples. For on that day, Nigerians shall, in a universal shout, confine the APC to the dung-heap of our collective yesterday.

May God help Nigeria and her people.