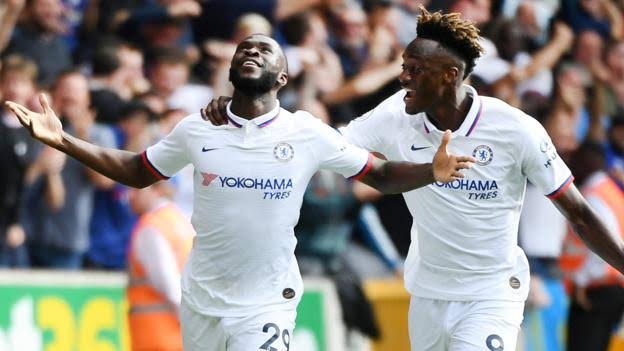 Tammy Abraham scored a brilliant hat-trick – and an own goal – as Chelsea destroyed Wolves at Molineux.

The England forward scored twice in the space of seven first-half minutes after Fikayo Tomori – another 21-year-old – had opened the scoring with a stunning 25-yard finish.

Abraham, who spent last season on loan in the Championship with Aston Villa, doubled the lead with a shot on the turn after referee Graham Scott had played an advantage following Conor Coady’s foul on Mason Mount.

Wolves, who remain without a top-flight win this season, fell further behind when Abraham headed home, before the Chelsea striker made it 4-0 with a superb finish after beating Coady – a seventh league goal of the season that took him to the top of the scoring charts.

In an eventful game, Abraham then scored an own goal as Romain Saiss’ header struck his right hand before crossing the line, before Patrick Cutrone added a second Wolves goal from close range.

Having scored two goals in each of his previous two league games, against Sheffield United and Norwich City, the forward showed off his repertoire of his skills in front of goal at Molineux.

This is the start of a huge week for Chelsea, who launch their Champions League campaign at home to Valencia on Tuesday, before entertaining Liverpool next weekend.

Yet they head into it with a spring in their step after an emphatic victory which left boss Frank Lampard delighted.

Under his predecessor Maurizio Sarri, the Blues suffered defeat at Molineux last season, while Wolves took a point from the reverse fixture at Stamford Bridge.

This side might be young and a little naive – yet it is also bursting with youthful promise and energy.

Tomori’s goal was breathtaking, while Mount produced a finish a Premier League veteran – let alone someone making only their fifth top-flight appearance – would have been proud of.

The only negative was for Lampard was his side’s defending. They are still searching for a first clean sheet of the season while they have conceded more goals than any other team in the Premier League.

Having already tied Mount and 23-year-old Ruben Loftus-Cheek to new deals, there are reports that Callum Hudson-Odoi, 18, has agreed a new five-year contract worth over £100,000 a week.

Hudson-Odoi, who handed in a transfer request in January, has been injured but is close to returning – another reason for Chelsea to be optimistic about this season.