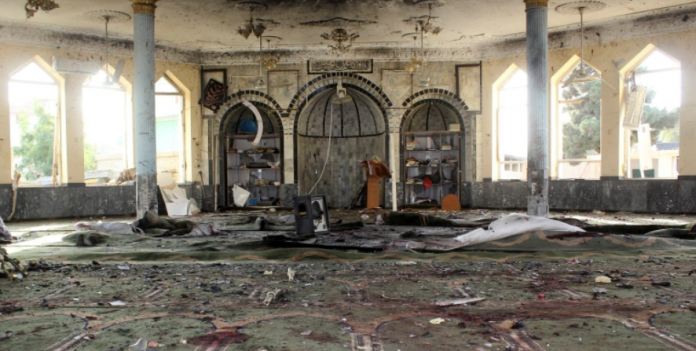 Samir Azizi was inside his house in the city of Kunduz while waiting for the Friday prayer to begin when he heard an explosion.

The sound came from a nearby mosque. As he arrived there, where hundreds of Shia Muslims had gathered for the weekly prayers, he was shocked by the carnage before him.

“It was dozens of people. Old men, young boys, all lying in pools of blood. You could hear people calling out for help,” the 25-year-old told Al Jazeera.

The Friday afternoon bombing, claimed by the Islamic State in Khorasan Province, ISKP (ISIS-K), killed at least 72 people and left more than 140 injured, according to residents and hospital sources in the province.

Azizi said that immediately following the incident, residents struggled to transport the wounded to health facilities, adding that ambulances did not arrive at the scene for at least 40 minutes.

“There was so few of us, but we did what we could, trying to transport anyone to a hospital,” he said.

Roads in the city are usually clear on Fridays but the delay could have had as much to do with the setbacks facing health facilities across the country ever since the United States and other international bodies cut off Kabul’s access to more than $9.5bn in assets and in response to the Taliban takeover in August.

Though the Afghan healthcare system saw many advances over the 20 years that foreign forces were present in the country, it was left highly reliant on foreign aid and the refusal of foreign governments to engage directly with the Taliban has left health facilities across the country struggling to treat patients.

Sources in the Kunduz regional hospital told Al Jazeera that five additional patients died from their wounds on Saturday.

Jan Mohammad, another resident of Sayed Abad, the neighbourhood where the bombing took place, said most of the victims were young people.

Najila Hussaini’s brother, Ajmal, was among those young worshippers. He left his house – about 200 metres from the mosque where members of the Hazara community had gathered – ahead of the prayers. The family was preparing lunch while awaiting Ajmal’s return when they heard the blast.

The 24-year-old immediately thought of her brother and rushed to the mosque. Like everyone else who arrived on the scene, Hussaini could not believe what she saw.

The family spent much of the rest of Friday and early Saturday scouring the nearby hospitals and clinics, but have yet to find Ajmal.

“There were so many pieces everywhere. Who knows, one of those pieces could have been my brother,” said Hussaini.

Friday’s attack was the third major bombing ISKP, the Taliban’s longtime foe, has claimed responsibility for since former President Ashraf Ghani fled and the Taliban took control on August 15.

It is also the second time this month that the group has targeted a mosque.

Last week, at least five civilians were killed when an ISKP bomber struck near Kabul’s Eid Gah mosque, where family and friends of the Taliban’s deputy minister of information and culture, Zabihullah Mujahid, were attending a memorial service for his mother.

ISKP has claimed responsibility for some of the deadliest attacks on Afghanistan’s Shia minority over the last six years.

The Taliban condemned the attack and promised it would take action against the perpetrators.

Sources told Al Jazeera about the rivalry between the two groups, saying that one reason ISKP has proven so difficult for the Taliban, and the previous Afghan governments, to take down is that they have changed their tactics and now operate mainly as “sleeper cells” who can strike almost anywhere.