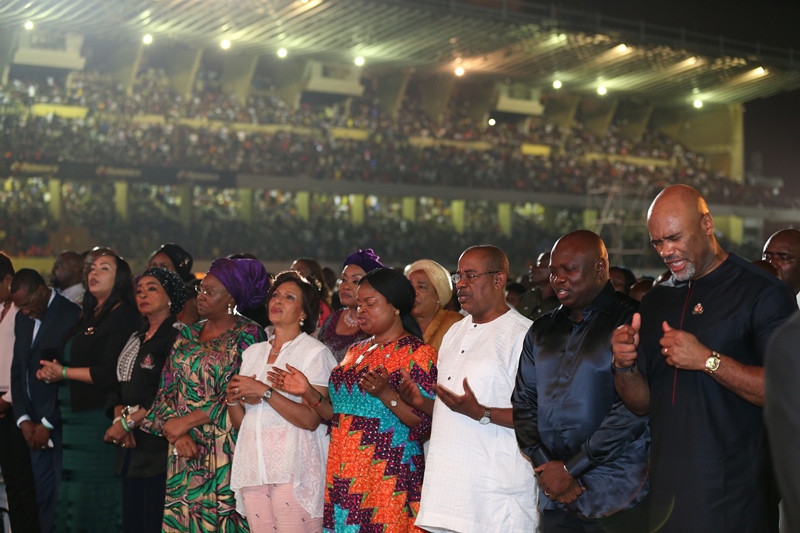 Share this on WhatsApp
Spread the love
Lagos State Governor, Akinwunmi Ambode, at the weekend, attended the 2017 edition of The Experience Concert, held at the Tafawa Balewa Square, Lagos. He commended organisers of the Concert, House on the Rock, for its donation of ICT infrastructure to 100 schools in the State.
Ambode, in his goodwill message, commended the idea of the Experience Concert, saying that in the last 12 years, it had continued to attract people from all walks of life, different faiths and socio-political persuasions, thereby dismantling the barriers of political affiliation, ethnic origin and doctrinal differences through an unhindered expression of faith through music and engendering a legacy of love, peace and unity.
ALSO SEE: Boko Haram plotting to bomb Abuja, say UK, US
He also lauded the founder and Presiding Pastor of the House On The Rock, Pastor Paul Adefarasin, for the various humanitarian interventions and corporate social responsibilities
in the State, saying that it was a testament to his leadership qualities.
“You have shown leadership and a spirit of excellence which has seen House On The Rock engage in several nation-building activities across the country, particularly in Lagos State.
Your contributions to interreligious dialogue, empowerment of the youth, social reformation and health care continue to positively impact the citizens of this state and on behalf of the people of Lagos State, we thank you,” the Governor said.
He particularly commended the initiative embarked upon by House On The Rock, which has seen the furnishing of 100 secondary schools across Lagos State with modern, fully equipped, air conditioned, functional Computer Laboratories.
The Governor in his remarks said the State was firmly on track to becoming a globally-competitive, dynamic and sustainable megacity, however stressing that it would require the cooperation and contribution of all and sundry for the State to realise its full potentials.
He said concerted effort would be required to sustain the developmental strides the State has recorded in the last 50 years and ensure that the future of the State is secured.
The Governor said: “Young and old, male and female, student and teacher, employer and employee. We must all rise to the challenge understanding that collectively, we can make this happen! We must be the change agents who will deliver a deliberately developed Lagos State to be bequeathed to future generations.”
Stressing that the interests of Nigeria could not be determined along religious, political, ethnic or social lines, Governor Ambode said that leaders in the country must rise to their responsibilities, put the nation first and determine what is just and equitable for all Nigerians.
“Men and women, whose voices influence the belief and value systems of our populace must begin to speak sincerely to one another to find common ground to build a prosperous nation and state; one that denies no man, woman, boy or girl the right to a peaceful and productive life. We all have a part to play to achieve this,” the Governor said.
On his part, Pastor Adefarasin, while presenting the handover certificate for the ICT infrastructure donated to the Lagos State education system by the Church to Governor
Ambode, said he (Governor) has produced new levels of development in the State, just as he expressed optimism of future partnerships with the State Government.
“It gives me great pleasure to present this certificate to the chaplain of nation building, the action Governor in Nigeria, one who we are very proud to call our own. We are hopeful that we would do more partnership with your government to help bridge the divide to give more kids the opportunity to excel and be part of nation building,” Adefarasin said.
Share this on WhatsApp
Related Topics:Akinwunmi AmbodeHouse on the RockLagosLagos State GovernorTafawa Balewa SquareThe Experience Concert
Up Next

Atiku woos Nigerian youth as he returns to PDP