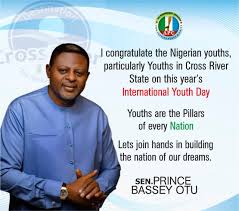 The State Chairman of the All Progressive Congress (APC) in Cross River, Alphonsus Eba, at the flag off of the APC state campaign in Ogoja local government area on Saturday, said that the APC governorship, Sen. Bassey Otu, stands out and is far above other candidates because of his track records.

Eba stated that Otu had done what none of the other governorship candidates has ever done when he served as a Senator from 2011 to 2015.

The Chairman urged residents in the state to vote for Otu, adding that he is the only candidate that has something to show for what he did in the past.

Eba declared, “Politics is not by mouth, it is by what you do; the seeds that you have sown, and Sen. Bassey Otu is the right seed. APC has been able to fulfil thousands of requests from people in Cross River and beyond.

“I am only now asking for one request: that we all come together, go and knock on the doors of those who are not with us and campaign vigorously for Sen. Otu and all our candidates.”

The APC State Chairman, thanking the people of Ogoja local government area for coming out en mass for the campaign, described them as the backbone of democracy in Cross River.

Also, Amb. Soni Abang, the Director General of Sen. Otu’s campaign organization, urged the people of Cross River to vote massively for all the APC candidates in the state.

Abang stated that the party fielded young and vibrant candidates in all the positions, saying that victory was sure for the APC in the 2023 elections.