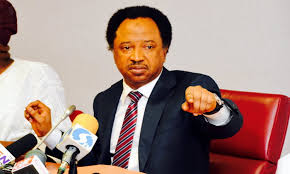 The national secretariat of the ruling All Progressives Congress (APC) on Sunday rescued Senator Shehu Sani, representing Kaduna Central, in the National Assembly from the indefinite suspension imposed on him by the Tudun Wada Ward in Kaduna State.

The APC in a statement by the Acting National Publicity Secretary, Yekini Nabena, in Abuja, on Sunday, reversed the indefinite suspension of the senator.

Nabena in the statement declared: “The National Secretariat has received the news of the suspension of Senator Shehu Sani by the Tudun Wada Ward Chairman and wish to clarify that the purported suspension of Distinguished Senator Shehu Sani representing Kaduna Central Senatorial District is hereby lifted and he is confirmed as a bona fide member and leader of our party.

“The Chairman Kaduna State Chapter has been directed to inform the relevant Ward and Local Government chapters appropriately and also put the necessary mechanism (in place) towards complementing the efforts of the National leadership towards ensuring lasting peace and unity in the party.”

Senator Sani has been having a running battle with Governor Mallam Nasir El-Rufai in Kaduna State. The intractable conflict compelled Senator Suleiman Hunkuyi, representing Kaduna North, to defect to the Peoples Democratic Party (PDP) in the Tuesday, July 22, 2018, exodus of 42 APC lawmakers in the National Assembly.

Senator Sani, however, during the solidarity visit of APC senators to President Muhammadu Buhari, affirmed his confidence on the APC leadership, insisting that he would not dump the ruling party. In recent speculation of defection, Senator Sani through a tweet, Sani denied decamping from APC but maintained that he is still in the ‘’broom city’’, and would notify the public about his next decision.