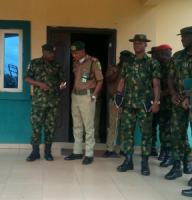 The 4 Brigade Nigerian Army has renewed collaboration with the Edo Command of the Nigerian Correctional Service to protect the custodial facilities of the Service.

The Public Relations Officer (PRO), of the Nigerian Correctional Service in Edo State, Aminu Suleman, in a statement indicated that the two security agencies reiterated the commitment to strengthen the security of the Centre when the Controller of Corrections Edo Command, Charles Ogwude, hosted the Brigade Commander, Brig.-Gen Danlami Ndahi, on a courtesy visit on Friday.

Suleman stated that Ndahi assured to build on the existing synergy with the correctional service.

“He also gave assurance of the brigade’s readiness to give full support to ensure that external security breach was not witnessed at the custodial centres,” he said.

He also said that Ogwude, while responding, appreciated Ndahi for the visit, which came up within a month of the commander’s assumption of duty as brigade commander.

According to him, the controller briefed the brigade commander on the security arrangements already in place and other dynamics of the collaborations.

“He noted that with the assurances and supports of the brigade, greater successes will be achieved.”