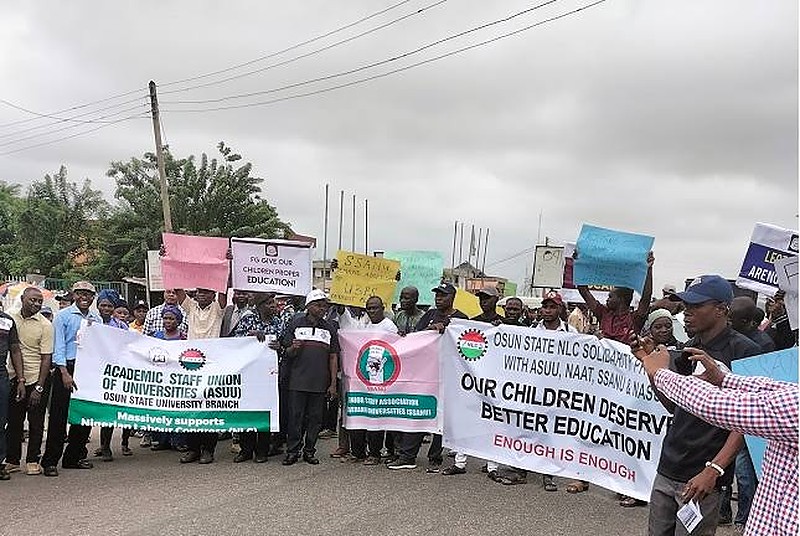 The labour union embarked on the protest in solidarity with the Academic Staff Union of Universities (ASUU), to demand that the Federal Government came to an agreement with ASUU to put an end to the six months industrial action.

They were, however, given protection by the Police, and other security agencies as they matched through the Gbongan-Osogbo expressway, starting from Ogo-Oluwa Area of the road to the state Assembly and later to the Government Secretariat in Abere, Osogbo.

Comrade Gbadebo Awotayo, Osun NLC Vice Chairman, who led the protest, said it was in conformity with the directive of the national body of the NLC.

Awotayo said the demand of the organised union was that the Federal Government should see the education of Nigerian students as paramount, resolve the ASUU crisis and reopen the universities.

He said the Federal Government should equally honour the agreement it made with the university community in 2009, just as he tendered the letter and demands of NLC, to the Speaker of Osun House of Assembly, Mr Timothy Owoeye.

Attending to the protesters, Osun Speaker, Owoeye said the state lawmakers equally shared the plight of the workers, ASUU and the affected students, adding that they were with them in the struggle.

“As a matter of fact, the accumulation of strikes has contributed to the condition Nigeria finds itself today.

“I want to categorically tell you that we are with you and that we share your plight,” he said.

The News Agency of Nigeria recalls that NLC President Ayuba Wabba had given directive to members nationwide to embark on a two- day protest on July 26 and 27, if the Federal Government fails to resolve the ASUU strike.