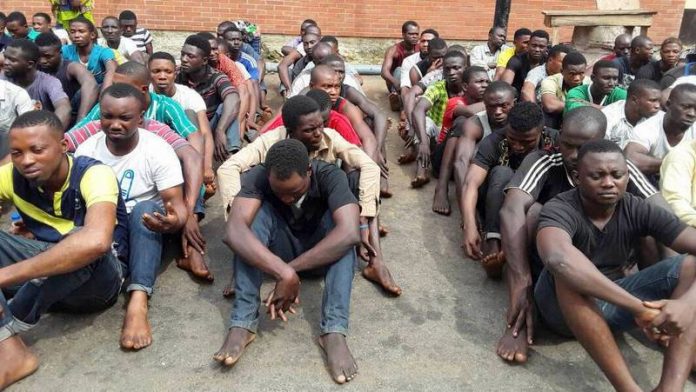 Share this on WhatsApp
Spread the love
By OKOSUN DENNIS
Until a ritualist was arrested by the police at Agbowa in Ikorodu, some people were still thinking, it was business as usual on the activities of Badoo cult group that have been terrorising people in that axis.
Since the nocturnal killing began, wiping out over 34 family members by Badoo, it has brought new security consciousness to Ikorodu residents as they are evolving methods to counter their buffoonery.
National Daily’s investigation revealed that the cult group have not only created fears in the mind of the people but made them to come to the realisation that everyday they spend in that once peaceful place brings them closer to their graves or nursing the potential of being attacked.
A resident told our reporter that what has enhanced the illicit activities of Badoo boys, to
the extent that Ikorodu has become a safe haven for cultists, kidnappers, ritualists and militants is because of cooperation they get from some criminally minded landlords.
ALSO SEE: What Badoo did to first victims after resuming killings at Ibeshe
Frank Adekunle, an Ijede resident told National Daily that since all the security forces mobilised with vigilante groups which involves Odua People’s Congress (OPC), the attacks have reduced considerably.
“It is just pockets of attacks, which I think is based on collective information over time by the Badoo boys.”
He reiterated that residents in areas like Isiu, Maya, Adamo, Imota areas where the recent attacks took place are still “sleeping with one eye closed.”
Why Badoo boys gained favour
Since Badoo was first heard of on June 5, 2016, despite former attributions to him to have participated in attacking several banks, suspected members of the gang were said to have struck at Oke Ota community in Ibeshe, and killed a 27-year-old Ghanaian, identified as Obinna after raping her.
As their notoriety grew, they on July 9, also struck at Ibeshe, attacking  one Francisca, 60, and blinded her 10 years old daughter, Marvellous.
National Daily gathered that the activities of Badoo have been encouraged by the lassiz faire attitude of residents who live a carefree life within the new developing areas of Ikorodu where houses have no form of security – fences and gates.
Investigation further revealed that some houses are either incomplete – without widows or burglary proofs – or some built in isolated areas where everyone seems to know his neighbour’s weaknesses either emotionally or economically.

Adekunle further revealed that “More so, Ikorodu has been a den of ritualists even before now hence they found favour in their various shrines to perpetrate their heinous crimes.

“The traditional rulers and the herbalists within these zone should be summoned by the state security agencies if a lasting solution is to be found to the lingering killings. They know themselves – from the Obas to the least herbalist,” he reiterated.

No wonder when the police made a breakthrough with the arrest of a traditional ruler, identified as Awoyemi, whose domain was used by Badoo boys to perform rituals with human blood at Oke-Ota Ibeshe, it was welcomed with unprecedented enthusiasm.
ALSO SEE: Badoo new tactic scares Lagosians
The uncovering of shrines used by Badoo members to perform rituals with five graves, big-horned figurines, sacrifices at the shrines in a forest in Agbowa area of Ikorodu was an indication that the killings carried out by Badoo boys had the support of some dubious residents.
Residents resort to self help!
National Daily’s investigation reveals that the tempo of security consciousness has risen since the buffoonery of Badoo cults crept in, making people to think out of the box while fashioning out suitable way to deal with the scourge.
At the moment, communities have formed vigilante group while others that could employ the services of OPC to patrol the nooks and crannies of the streets at night, have done so.
An Adamo community resident told our reporter that they have begun keeping vigils and collective day watch to curb the nefarious activities of cult boys, kidnappers and other criminal gangs who want to take advantage to wreck havoc.
Another Ikorodu resident, Mr Isaac expressed satisfaction with relative calmness but swiftly added that they have started vigilante.
“There is a better situation now, and we pray it remain like this. We are all participating in vigilante for now. The police cannot be trusted, ritualists are too many in Ikorodu” he added.
For the past few months, Badoo boys went on killing spree, using stone to smash peoples head, some Ikorodu residents spoken to are of the belief that some mystic powers manifest which has made it easier for them to strike without been seen or caught.
However, Frank sees it differently. “If they are spirit beings they will not be visible. They are human evil possessed beings. From their sophisticated weaponry, they are not the poor or average lagosians.
“They are among the rich using the disadvantaged youths to get richer. Joblessness has pushed most young boys into it. From confessions made by those caught so far, each white blood socked handkerchief cost N500,000.
ALSO SEE: This is what Badoo now do to victims in Lagos
“So the mentality of these job seeking youths to go into rituals is propelled by the rewards dangled at them by the master minder – rich men – in the society.
Badoo shrine
The arrest of Alaka Abayomi and two operators, whose identities were given as Christian Junior and Bamidele Owoyemi, brought new horizon to the fight to obliterate Badoo boys in Ikorodu.
As most residents expressed happiness over the raid of the shrines, but they lamented that several complaints of atrocities committed by the shrine tender did not yield result.
They saluted the operation carried out by the Inspector-General of Police Special Tactical Squad, (STS), led by Imohimi Edgar, the Deputy Commissioner of  in-charge of Operations, who struck the area based on intelligence.
Badoo atrocious killings
Between 2016 and July 2017, no fewer than 34 residents of Ikorodu, Lagos State, have been killed by Badoo, a notorious ritual cult group.
The deaths were recorded in 15 attacks by the gang between June 5, 2016, and July 2017.
Badoo boys also carried out an attack on a Celestial Church of Christ building in Itesiwaju community, Ibese on July 23, during a vigil and kidnapper a toddler.
On 21 October, 2016, Oluwoye community was attacked where a pregnant woman, Afusat Yusuf was hacked to death while other members of the family were injured.
As Badoo continuecits attacks on innocent residents of Ikorodu, smashing their heads at night, on December 26, 2016, they struck at Saka Adegbose Street, killing two siblings, Azeezat Oriade and Abeeb Oriade.
However, on 1 March, 2017, Mosafejo Street, Agbowa, Ikorodu, was the next destination of attack where three children were killed in their sleep with their mother.
On June 23, 2017, they hit Ogijo in Ogun state killing a couple. While on June 28, a family of five were wiped off. The victims were identified as Ike David, 50; Margaret David, 28; Ike David (Jnr) 5; Matthew David, 4; and Friday David, 2 at Olopomeji, Odogunyan.
As all hands are on desk to rout Badoo cult group especially with the commitment and reassurance by the police of new “operational strategys” to tackle the crime, it is hoped that every measure will galvanise into successful routing of Badoo boys.
Share this on WhatsApp