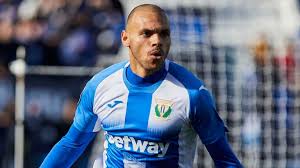 The La Liga champions in a private contract signing at the Palco President Suñol room paid the 18 million euros buyout clause for the Denmark international, who scored eight goals in 20 matches for Leganes this season.

According to Skysports, Braithwaite will only be eligible to play in La Liga for the remainder of the season, with Barcelona having already submitted their squad for the knockout phase of the Champions League.

The 28-year-old player started out in the academy at Sædding-Guldager Idrætsforening, after which he joined the biggest club in his city Esbjerg fB, and four years later switched the blue-and-white of EfB for the violet of Toulouse in France.

Braithwaite made his mark at TFC, scoring 35 goals in Ligue 1 before changing club and country once again, this time joining Middlesbrough, who were in the English Championship at the time.

After scoring four goals in North Yorkshire, he was headed back to France on loan to Bordeaux, where his four goals helped Girondins into the Europa League. After returning to Middlesbrough, in the 2018/19 winter transfer window he was on the move again, this time to Leganés in Madrid, which is where he has truly made his breakthrough. It was very much thanks to him that the ‘cucumber growers’ managed to stay in the first division. In his first half-season at the club, Real Madrid, Barça, Rayo Vallecano, Valencia and Sevilla were all on the receiving end of his goals, and he has added a further eight this term.

Braithwaite has also earned his spot on the Danish national team. He was at the Russia 2018 World Cup, where his side succumbed to Ivan Rakitic’s Croatia in the last sixteen on penalties.

Biffo calls for patience as team prepares for Dakkada game