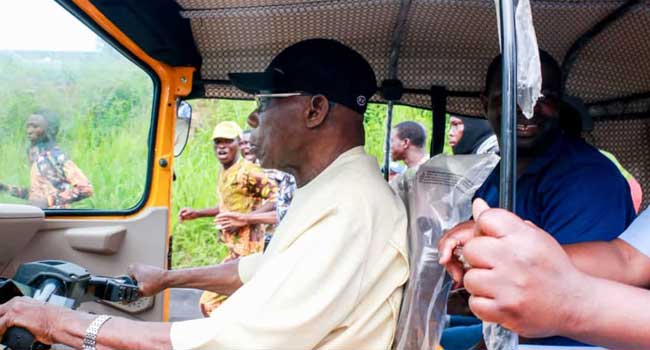 Several residents of Abeokuta, Ogun State, were thrown into a strange world on Saturday when they noticed former President Olusegun Obasanjo operating a tricycle in certain parts of the state capital, conveying passengers from one point to the other.

Dr. Obasanjo, in white native outfit with a face cap, commenced his trade of the day from the Moshood Abiola Way, adjacent  to the Nigeria National Petroleum Corporation (NNPC) mega station, Abeokuta, picking passengers randomly from the location to Kuto Market.

However, the fun was part of the activities to mark Dr. Obasanjo’s 85th birthday anniversary. The former President who was 85 in March has continued the fun fare of the celebration of the milestone.

Dr. Obasanjo had earlier donated 85 tricycles to young person in the 36 states and the Federal Capital Territory in commemoration of his 85th birthday.

Obasanjo at the ceremony, “OBJ @85”, gave out tricycles through the Youth Development Centre of the Olusegun Obasanjo Presidential Library.

Nigeria does not want Ndigbo as part of it – Prof. Obiozor