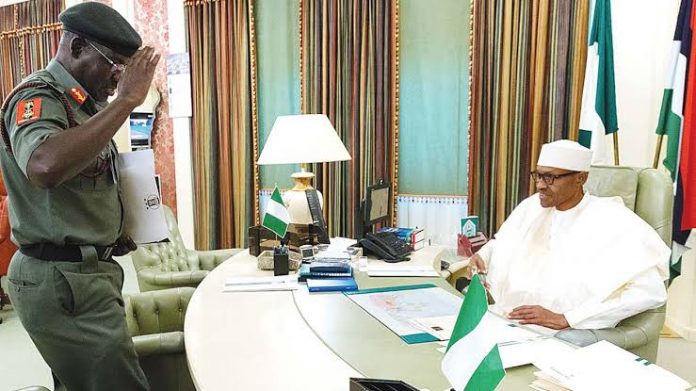 President Muhammadu Buhari on Wednesday may have expressed shock of perceived disappointment of the Chief of Army Staff, Lt. Gen. Tukur Buratia, who after one week of claiming at the State House, Abuja, that the military have killed over 1,400 terrorists in recent operations in the northeast, could not sustain the claimed success as the terrorists unleashed fresh monumental violence in rural communities in Borno State.

The presidency in a statement on Wednesday indicated that “As news of one the most brutal terrorist attacks on innocent people emerged from the Northeast, President Muhammadu Buhari said he is deeply shocked by the brutal killing of tens of people by the Boko Haram/Islam in West Africa Province (ISWAP) in Gubio village, Borno State.”

The statement further indicated that President Buhari who was expecting a detailed briefing by the Borno State Governor, Professor Babagana Zulum, on the outcome of his visit to the affected communities, decried that the “primordial nature of the killings is particularly shocking because it happened not long after the Ramadhan and Eid, and the country is preparing to celebrate the Democracy Day.”

President Buhari, therefore, condemned the mass killing, challenging “the armed forces to sustain their recent string of successes against the terrorists to extract a heavy price from the attackers, and bring back all those they kidnapped as well as the large number of cattle rustled.”