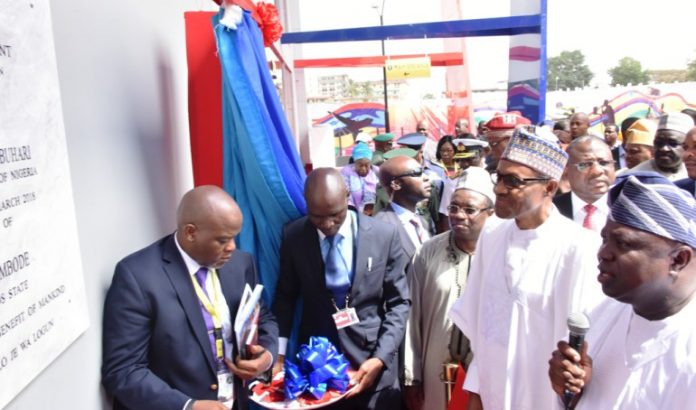 President Muhammadu Buhari on Thursday began his two-day official visit to Lagos State with the unveiling of ultra-modern Ikeja Bus Terminal designed to redefine public transportation in line with the Bus Reform Initiative of the State Government.

The President, accompanied to the terminal by Governor Akinwunmi Ambode, and other government functionaries, lauded the State Government for various initiatives aimed at catering for movement of the growing population of the State and making modern buses available to the people.

He particularly commended Governor Ambode for his developmental strides in the last three years, saying the projects were indeed laudable.

“I commend the Governor for the development strides he recorded within the first three years of governance. I recognize the push of the State Government in reforming public transportation especially the Bus Reform Project which will make modern transport buses that are air-conditioned available to the people.

“I acknowledge the vision of Lagos State Government to revamping the railway transportation system. Presently, we have outlined in new-year message of the plan for a-Pan African Railway Transportation. I commend Lagos State for also developing rail infrastructure to cater for movement of its growing population,” President Buhari said.

Earlier, Governor Ambode said the Ikeja Bus Terminal signposts the commitment of his administration to reform public transportation infrastructure and management in the State, adding that the vision remained the provision of a functional, efficient and integrated transport system to support the populace and facilitate commerce.

He said: “In the last three years, we have committed to revamping and providing a new integrated transport system to support our growing population. We have initiated and completed the provision of infrastructure that are scalable and would support the daily needs of our people to meet their connectivity and mobility needs.

“The Ikeja Bus Terminal is one of our flagship transport infrastructure under the State Bus Reform Initiative. The first phase of this programme will see 13 new Bus terminals introduced including major terminals at Oshodi, Yaba, Ojota, Agege and the already completed Tafawa Balewa Bus Terminal.

“We have commenced the introduction of 5,000 new buses into the Lagos economy in the next 3 years. We will inject 820 environmentally-friendly high capacity buses in the first phase of this reform by September 2018, 300 New Bus Stops, 3 Bus Depots, and Intelligent Transport System which will aid Lagosians to plan their journeys on our public transport system.”

The Ikeja Bus Terminal, which is estimated to convey about 200,000 passengers daily across 23 destinations, has been fitted with all aspects of public transport operations such as buses, passengers’ insurance, 13 ticketing boots, route licensing, terminal bus attendants and operating companies.

Apart from eliminating all the previous chaos and difficulties associated with boarding bus to different locations, the facility which is sitting on 10,000 square metres land space, is equipped with Intelligent Transport System (ITS), food court, shops, rest rooms, ATM Gallery, free Wi-Fi, electronically controlled shades, fully air-conditioned terminal, among others.

The ITS enables would-be passengers to know the arrival and departure time of buses from the comfort of their homes, offices or anywhere and properly plan their journey.

Statistics show that over 12 million Lagosians and 80 million Nigerians use public transportation daily without standard facilities and the Ikeja terminal is one of the 13 designed to change the narrative in Lagos by exposing the people to befitting and comfortable environment to commute across the State.