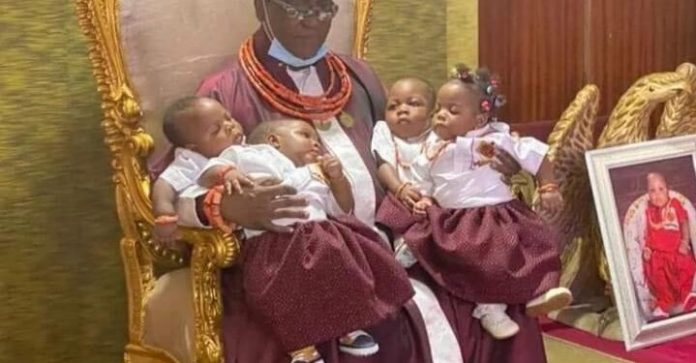 There was celebration at the Palace of the Oba of Benin on Sunday, as the traditional ruler, His Royal Majesty, Oba Ewuare II, conducted the naming of his quadruplets in Benin City.

The four children were delivered in August 2021 by Her Royal Highness, Oloi Aisosa Ewuare.

The formal presentation of the babies to entire royal family members, chiefs and top palace functionaries by the Oba was done at the presidential office of the palace.

After the ministration of palace guilds – Emelhe, Isikhuan groups (royal praise singers) – as well as prayers by several chiefs of different grades and songs of prosperity to the royal family, Omo N’Oba Ewuare proceeded to Ugha-Eroba, the ancestral ceremonial hall of the palace, for prayers of protection, guidance and prosperity for the three infant princes and a princess at the ancient alter of the Oba.

Oba Ewuare, thereafter, revealed the names of the new babies, announced by Chief Letema, acting in the absent of Head of Ihogbe group, Chief Ihama.

Thereafter, the celebration continued at the palace.