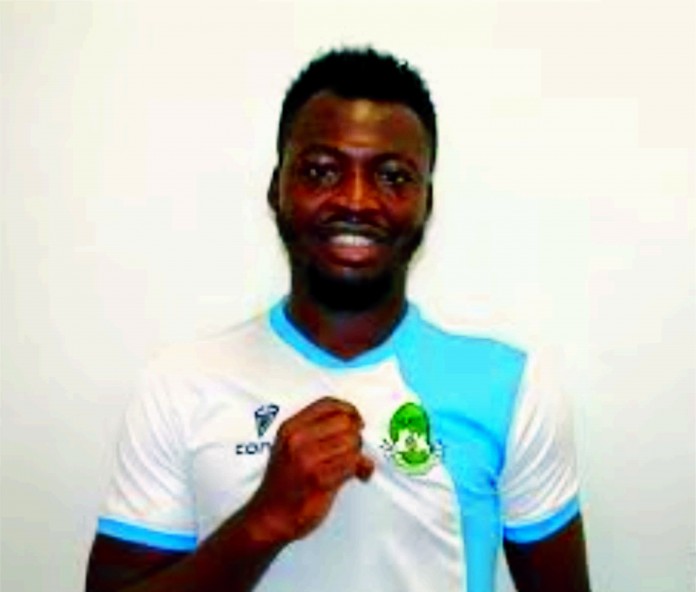 One of NPFL top midfielders, Ichull Lordson, speaks with ESTHER EGBE about the game and other issues. Excerpts:

WHAT motivated Ichull Lordson to venture into football?
I was passionate about soccer right from my child hood and am from soccer family so, am sure the blood from my dad has a great part for me be passionate about soccer.
I followed you right from your days at Kwara football academy you played virtually as a dependable full backs but you have grown to be one of the best box to box midfielder in

Nigeria soccer league what the secret behind?
Yeah Kwara football academy is a soccer school where you are been taught in so many ways of been a true professional, that you can play any position in the field of play, and most especially is all about your set goals, of saying to yourself the positive things you want to be in your career.

Since you started playing professional football, which coach would you say have impacted positively on your growth and which club do you wish you never played for?
For sure it worth been in, cause in academy you are brush from just a talent, to become a true passionate of the talent you have and what it can bring out of you, or let me just say to make you know whom you truly are.
Also the central defender that got injury and was substituted contributed.
I will say Clements Westerhof really taught us and made us not be chicken hearted professional, so he laid a good foundation for me in my career, which am forever grateful to him, but my career was polish when I met the new coach who took over from Westerhof when Westerhof left in person of Paul Ashwort.
As a professional and passion soccer star, as the leather is round so it is possible for you to move round again, so I have never had any club I ever wish not to play for.

Who is your role model in football?
When I was growing up I so much love watching kola Anubi playing that I must go to the hotel the lodge to go and stay with him for a while before leaving him to rest whenever he follows his team down to play in Kwara Ilorin or any where I was. So kola became my role model just because of the way he plays and I like him as an individual before we even played the same club.

What was your reaction playing with him?
I was like wow, and he always took me around with encouraging words on the pitch, and whenever am with him will be telling must of team mate that am his boy before I started my pro and they will be like na lie ooo.

What has been your most memorable NPFL experience?
Playing with Warri wolves then having a dream of lifting the NPFL with empty stomach and not still be distracted by the financial state of the club then. Still appreciates the days.

Since you moved from Warri Wolves to Nassaraw United , what has being the difference in terms of wages and salary any improvement?
Yes it shows how we the players where true professionals and great team with zeal to defend the seasiders no matter the financial state of the club then with great managers who understood their duties the likes of Owumi, Sam and great Paul Aigbogun.

In NPFL now is not what you are been promised but what you have been given as negotiated by both parties?
So the difference is 4filment and none 4fillment of agreed contract terms.

So one of them is fulfilling the contract agreement?
Yes for sure.

We read somewhere that you and other ex-players of wolves reported your former club to the LMC, what happened? Because the ex chairman and now the GM said that if you guys have a proof that you were owed, that they can settle you guys.
Yea reported the issue to the LMC since and it has been over look cause we haven’t heard from LMC since our rep sent them the letter and our contract which was signed by me to them I still have the copies with me and sure LMC has a copy too, so it lays in the hands of the higher authority not even wolves management, the ex -chairman am sure he knows nothing about me and the because he was never too closed to know about players financial agreement, why I said so is, u have the chairman of sport commission delta state, chairman of the Warri wolves, secretary, Team manager, so if we the count people that should have known better I am sure the club media officer is far behind to know much about contract terms with players and administrators. So am sure he don’t know about but the evidence is there and LMC is aware of it, no lies if they so they are not aware.

Ok you are saying Mr Etu might not be aware of it.Have you guys tried to communicate him since he came on board?
As he came on and before he became the administrator of the club he knew what we were going through and our financial state in the club, but the new administration has deny everything relating to it, even we that left the club when they paid the bonuses we won last season playing with empty stomach they refused paying us, so you see. May be you ask him again and he will have a very important answer to give you, or maybe we will be needing prove again.

What do you think contributed to the failure of Nasarawa united at the continent?
For sure Nasarawa where not fully prepared and lost out due to tactical discipline on the pitch.

Tactical discipline? Can you explain that to people like us who knows little about the game?
If you conceived 3 goals in 16 minutes is cheap and tactical discipline, if your players are not tactical discipline on the pitch of play you lose out cheaply.
Doing the basis of the game playing yourself out position is part of the discipline be where you should be at the right time. The instructor can’t be wrong but we the players, if we were in the right positioning.

What happen to your transfer to Enyimba? Cause a lot of rumors has it then that you are joining the defending champions?
It was due to the agreement, for sure we both never want the terms to be based more on one side, that was why the deal collapsed

Your team (Nasarawa United) is presently 7th on the log as at week 30! Where do you see yourselves at the end of the Season?
By his grace how they shocked people last season, am sure the team has conceive that the continental should always be like their birthright , so continental is still in our hearts.

Which team/player is the most difficult you have played against.. And how was the experience?
Etebo and barnabas Imenger junior, it is not easy to chase this lad cause as a player who players in my position, it is my primary duty to work harder to in all areas for this sharp sneaky hustlers, great pace good goal scorers by hook or means.