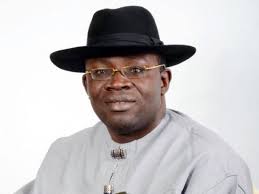 By Boluwatife Ezekiel Olaleye
Bayelsa State Government, Seriake Dickson, has professed that the All Progressives Congress, APC has been so weakened that it cannot win any elections again.
The governor said Bayelsans should not allow themselves to be deceived by a party that has not been able to deliver anything to them.
Dickson said this while addressing some defectors from the APC, in Bayelsa yesterday.
According to him, “Just a word for the other side, for those deceiving people with newspaper articles, who are not on ground; let me call on you to play according to the rules.
“If you are truly on ground and willingly to test your popularity in all elections, mobilise your people and sell what your Federal Government has done for our people.
“Tell our people in your communities what the federal government has brought to them. Because, what we have put on ground is in every community, it is in every local government for people to see.
“The young people of this state should not allow themselves to be deceived and misled.”