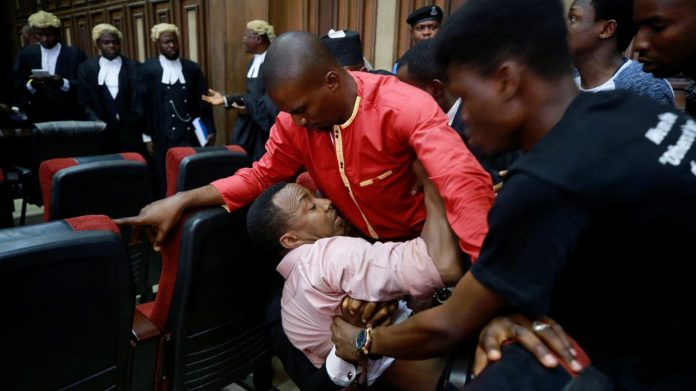 The violent invasion of the Federal High Court, Abuja by the Department of State Services (DSS) for the re-arrest of Omoyele Sowore who was released on Thursday from the DSS detention cell provoked caustic reactions across the country. The DSS had released Sowore on the order of the court which issued the security agency 24 hours ultimatum to grant him freedom after the DSS had declined his release in defiance of bail granted by the court.

The DSS invasion of the Federal High Court in Abuja to re-arrest Sowore during court proceedings was resisted by Sowore’s supporters which gave rise pandemonium in the court, forcing the presiding judge to abandon court proceedings and run for ger life.

Council to Sowore, Femi Falana SAN, challenged the DSS that it was very wrong to arrest his client inside the court, telling them to wait outside the court premises. Falana, thereafter, drove Sowore in his vehicle to the DSS Office where he was re-arrested and detained.

The court had adjourned the proceedings to February 11, 2020.

Several statesmen have condemned the DSS misconduct in court.

A few years ago, I watched the video of a pack of the famed African wild dogs hunt, eventually bring down, and proceed to devour a quarry. It was an impala, antelope family.

The pack isolated the most vulnerable looking member of the herd – it was pregnant – pursued it, until it fled to a waterhole which, for such animals, is the nearest thing to a sanctuary.

A few minutes ago, almost as it was happening, I watched the video of a pack of the DSS, bring down, and fight over their unarmed, totally defenceless quarry within the sanctuary of a court of law.

I found little or no difference between the two scenarios, except that the former, the wild dogs, exhibited more civilised table manners than the DSS u court manners.

Only yesterday, in my commentary on the ongoing Sowore saga, I pointed out the near-perfect similarity between plain crude thuggery and the current rage of court disobedience.

Little did I suspect that the state children of disobedience would aspire to the level of the African wild dogs on a pack hunt.

I apologise for underestimating the DSS capacity for the unthinkable. I reiterate the nation’s concern, indeed alarm, about the escalating degradation of the judiciary through multiple means, of which disobedience of court orders is fast becoming the norm.

It is so obvious – state disobedience leads eventually to civil disobedience, piecemeal or through a collective withdrawal of recognition of other structures of authority.

That way leads to chaos but – who set it in motion? As is often the case, the state, unquestionably. Such a state bears full responsibility for the ensuing social condition known as anomie.

It has become imperative and urgent to send this message to President-General Buhari:  Rein in your wild dogs of disobedience.  And for a start, get a trainer to teach them some basic court manners!

Chief Mike Ozekhome SAN:
BACK TO THE GUTTERS: DSS INVASION OF THE SACRED PRECINTS OF A COURT OF LAW

Today, 6th November, 2019, the DSS, the nation’s secret Service in the mould of FBI or CIA, danced naked in the streets, when it invaded a court of Law in an attempt to arrest Omoyele Sowore, accused of treasonable felony over his “Revolution Now” mantra. Recall that the DSS had finally bowed to a 24-hour ultimatum issued by Justice Ijeoma Ojukwu, to release Sowore and pay him N100,000 damages. It was a show of extreme shame, disgust and degeneracy to see a whole secrete security apparachick descend to the abysmal gutters of physically invading the hallowed chambers of a court of Law to forcefully arrest a suspect, viet armis, by resort to crude and unorthodox Hitlerite Gestapo tactics in a supposed constitutional democracy. The video that went viral about this ugly and ill-advised outing that has further reduced our worth in the perception of the international community is condemnable in every sense of the word. It downgrades us, belittles us, and our humanity and make us laughable before civilised nations. We beheld an unarmed, helpless and hapless Sowore being dragged on the floor, helplessly, like a vanquished prisoner of war (PoW) just taken as ransom. Justice Ojukwu had to be spirited off to her chambers by her security. When a government that is supposed to respect and protect institutions, citizens’ rights and rule of law, invades and desecrates the SACRED precincts of a Court of law, then we are in trouble. When the same DSS invaded Judges’ homes in October, 2016, terrorizing the hapless Judges and their families, many uninformed Nigerians hailed the misadventure as a sign of fighting corruption. I had vehemently disagreed then, citing section 36 of the 1999 Constitution and section 7 of the ACJA that inure in us our humanity and human dignity and respect. I had warned then of a possible descent into anarchy and chaos if the masked DSS goons were not immediately restrained and halted on their tracks. Friday’s disgraceful and atrocious outing by the DSS is the clearest exemplification of a rudderless state in search of a redemptive deus ex machina. A government that is short on tolerance to criticism, plurality of voices and opposition and which serially violates citizens’ rights and disobeys court orders is a ready recipe for organised disenchantment. Our constitutional democracy should be one modelled on the rule of law and not on the rule of the thumb of a benevolent ruler, even if dictatorial, tyrannical, absolutist and fascist.

That was extremely embarrassing

The DSS had said they were inviting Omoyele Sowore and Olawale Bakare for questioning at their office to answer a few questions on fresh charges but are yet to disclose what they are.

The atmosphere was very rowdy, but I insisted that the arrest could not be carried out within the precinct of the court. He was going to be arrested outside the premises but there was a crowd that resisted the arrest, but I appealed to everybody and asked Sowore to jump into my car and so we drove to the office of the SSS because they said he will just answer a few questions, but now he is being detained.

We are going to take steps under the law by asking for his release again since they are claiming this is a fresh arrest.

Nobody has disclosed yet what his charges are; he couldn’t have committed any other offence because he has been detained for the past four months unless the SSS wants to tell the whole world that he committed this fresh offence while in their custody.

This morning, the SSS lawyers and the lawyers of the Attorney-General reported to the court that the order of the court had been complied with and I confirmed because our clients were released last night.

As soon as the court adjourned the matter to February next year, the SSS operatives pounced on the court, disrupted proceeding and, then, attempted to arrest our clients even in the web of the court, that was extremely embarrassing because it has never happened in Nigeria where you enter a court to arrest anybody, even an alleged coup plotter.

Without Rule of Law, There Cannot Be Rule At All

Today, I am in extreme anguish of spirit having watched the unfortunate drama that played itself out at the Federal High Court sitting in Abuja, in which agents of the state not only caused a commotion in court in order to frustrate a judgment of a court of competent authority.

Never in the history of Nigerian democracy has a judge been treated in such a disdainful and brazen attack on not just her person and office, but on the entire judiciary. This is unacceptable. It is a rape on the sanctity of the court. Nigeria is not a dictatorship. We are a democracy, no matter how inconvenient this fact is to the powers that have forced themselves on us.

I call for an immediate inquiry to be set up to identify those responsible for the maltreatment meted out to Justice Ijeoma Ojukwu and the desecration of her court, and indeed the Nigerian judiciary. They must be sanctioned to the highest extent permissible by our laws.

I further call for all law enforcement agencies in Nigeria to immediately respect not just the court order made by Justice Ojukwu, but the order of any court in Nigeria, on any detainee, be it Omoyele Sowore, Sambo Dasuki or Ibrahim Zakzaky, among others.

We cannot have a situation where our government is quick to obey foreign court orders and even quicker to disobey domestic court orders. This is symptomatic of a mindset that is servile to foreign powers and brutal to Nigerians.

Without the rule of law, there can be no rule at all. Power in Nigeria still flows from the people, not from the barrel of a gun. I call on all men and women of goodwill not to keep quiet or sit on the fence at times like this.

To keep Nigeria a democracy is the paramount duty of all concerned stakeholders. Please speak up against this tyranny and side with the Nigerian people.

If I am the President of the country and DSS throws my government into this embarrassment, I will even remove the DSS, whoever is in charge of that particular body.

He (President Buhari) should relieve him (the DSS boss) of his position. He has really, clearly embarrassed this government.

What has taken place today is reported all over the world and Google doesn’t forget. Foreign partners who may want to do business with the Nigerian government may backtrack based on the nation’s non-adherence to the rule of law.

We are really in a big economic problem and will require the support of other nations in order to solve it. They look at your history and what is going on with respect to the rule of law and even democratic credentials, you don’t have it. Then, they begin to wonder what is going on.

Today it is Sowore, tomorrow it might me or you or someone close to you. It should concern you. #FreeSoworeNow

There’s no other view other than the obvious reality that NIGERIA IS OFFICIALLY IN A DICTATORSHIP! #FreeSowore #FreeSoworeNow