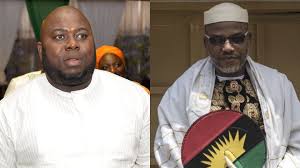 The prolonged dispute between the leader of the defunct Niger Delta People’s Volunteer Force (NDPVF), Alhaji  Asari Dokubo; and leader of the Indigenous People of Biafra (IPOB), Nnamdi Kanu; resurfaced at the weekend, trending widely on social media.  Asari Dokubo had accused Nnamdi Kanu of the collecting money from governors of the southeast states amounting to “hundreds of millions.”

Dokubo had made the revelation as he denied the allegation by IPOB members that Kanu offered Dokubo N20 million to support the struggle for Biafra independence. He had alleged that Kanu received N200 million which, he said, were diverted.

“I never betrayed any of your members you sent them to me and they left. As we speak, I have about 18 IPOB members staying in my house because of the love and trust they have for me. So many IPOB members, BSS Commanders come to me and even beg me not to talk.

“I swear, if I collected any money or betrayed any Biafran, may Allah punish me in this world and the one after.

“I also now ask Kanu to swear if you have not been collecting monies from all the governors of the Igbo states and beyond running into hundreds of millions.

“Swear that you have never betrayed IPOB members to the DSS, I know that whether you swear or not your days are numbered.

“You will soon be punished and the whole world would see your disgrace. I stand by the Quran and maintain that if I ever demanded N200 million and you gave me N20 million, may Allah punish and disgrace me in this world and the one thereafter.”

Both Asari Dokubo and Nnamdi Kanu are remarkable propaganda specialists, having been leaders of liberation struggles.

It was gathered that the IPOB leader, Nnamdi Kanu, had labelled Dokubo a liar, maintaining Dokubo collected money from him. Kanu, however, said he halted offering money to Dokubo when he discovered Dokubo is a “full time Fulani Caliphate agent.”

Kanu had revealed that Dokubo was praising him to high heavens when he was giving him money.

Citing some of the praises on him by Dokubo which made headlines in the media, Kanu had declared: “All the above quotes as captured in this video below were when I used to give him money but as soon as I discovered he is a full time Fulani Caliphate agent and stopped, his petulance and name-calling started. You can take a man out of the Zoo, but you can’t take the Zoo out of a man.”

Dokubo had vowed that the end of Kanu was near, adding that his exposure will reveal a lot bout him and the Biafra struggle for the Igbo nation.

Over one year of the dispute between Dokubo and Kanu, the issue has continued to play out in the public space.