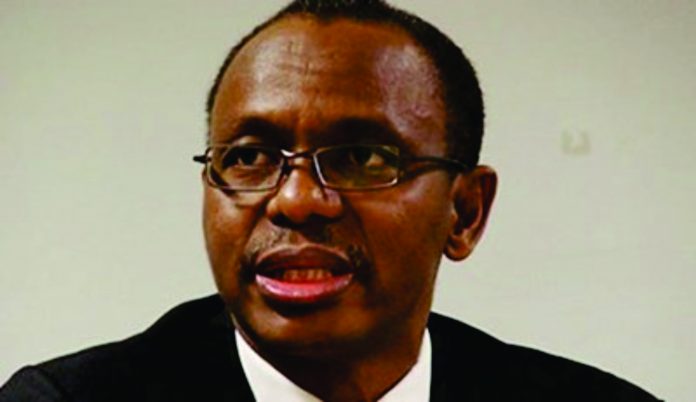 Share this on WhatsApp
Spread the love
A pro-democracy and non-governmental organization- Human Rights Writers Association of Nigeria (HURIWA), has criticized the Kaduna State Governor Mr. Nassir El-Ruffai for demolishing the house of the National Vice Chairman of the ruling All Progressives Congress (APC) (North West) Alhaji Inuwa Abdulkadir because of political differences.
Specifically, Abdulkadir’s house located at Yakubu Avenue, Kaduna, was pulled down by officials of the Kaduna State Urban Planning and Development Agency (KASUPDA) last Thursday while he was in Abuja for party meeting.
However, an official of KASUPDA claimed that the house was demolished because it was illegally constructed.
But the pro-democracy body said the Kaduna state Urban planning Agency was economical with the truth given the antecedents of governor Nassir El-Rufai who has in the past two years enforced draconian measures to get at perceived political opponents and even peace-makers like the national official of his political party whose only sin was for refusing to allow himself to be pocketed by the Kaduna state governor to be used to prosecute his self-inflicted political infighting with reputable activists like Shehu Sani.
Besides, the Rights group said governor El-rufia has become notorious for inducing both the Kaduna state police command and the security forces to embark on choreographed arrests of perceived opponents including persons with independent voices such as Dr. John Danfulani and Apostle Johnson Suleiman of the Omega Fire ministry who condemned El-Rufai’s handling of Southern Kaduna genocide only for the Pentecostal pastor to be invited by the Department of State Services and soon after many blackmailers flooded the media with allegations of extra-marital sexual relationship.
ALSO SEE: APC battles Sagay over attacks on Senate
The Rights Group also carpeted the Kaduna State Governor for ordering the demolition because the National Officer of the ruling party which is the same with that of the Kaduna Governor had opted to employ unbiased conflicts resolution mechanisms to restore peace in the Kaduna State Chapter of the All Progressive Congress which is factionalized between supporters representing Kaduna Central Comrade Shehu Sani and the governor’s sycophants.
“This demolition is evil, illegal and a blatant disrespect of the principle of rule of law and all known democratic tenets and ethos. President Muhammadu Buhari must call governor ElRuffai to order before he demolishes democracy because of his unbridled selfish political ambitions “.
In a statement in reaction to the demolition of the house of Alhaji Inuwa, a life member of the body of benchers and a Former Minister of Youth Development,The National Coordinator, Emmanuel Onwubiko, and The National Media Affairs Director, Miss Zainab Yusuf, also condemned the dictatorial tendencies of the Kaduna Governor who disrespected a pending matter before a court of competent jurisdiction to use bulldozers to destroy the housing asset which was the bone of contention in the court.
“Why the hurry to destroy the ‘res’ or subject matter of a pending and subsisting suit other than to foist a predetermined conclusion to the presiding judge? This is a violation of the principle of separation of powers and is hereby absolutely condemned”
“Asides constituting a gross violation of the constitution, the action of Mr. El-Ruffai is a serious breach of the oath of office which he swore before he assumed office. The oath sworn by him affirmed that “that as the Governor of Kaduna State, he will discharge his duties to the best of his ability, faithfully and in accordance with the Constitution of the Federal Republic of Nigeria and the law,… that he will not allow his personal interest to influence his official conduct or his official decisions; that he will to the to the best of his ability preserve, protect and defend the Constitution of the Federal Republic of Nigeria;”
HURIWA has, therefore, warned the Kaduna State Governor that he would be blacklisted by the global human rights community and enlisted in the Black book of traitors who wants modern democracy destroyed in the same way late dictators like Idi Amin of Uganda and Mobutu Sese Sekou of Republic of Congo (Kinshasha) are rated.
Share this on WhatsApp