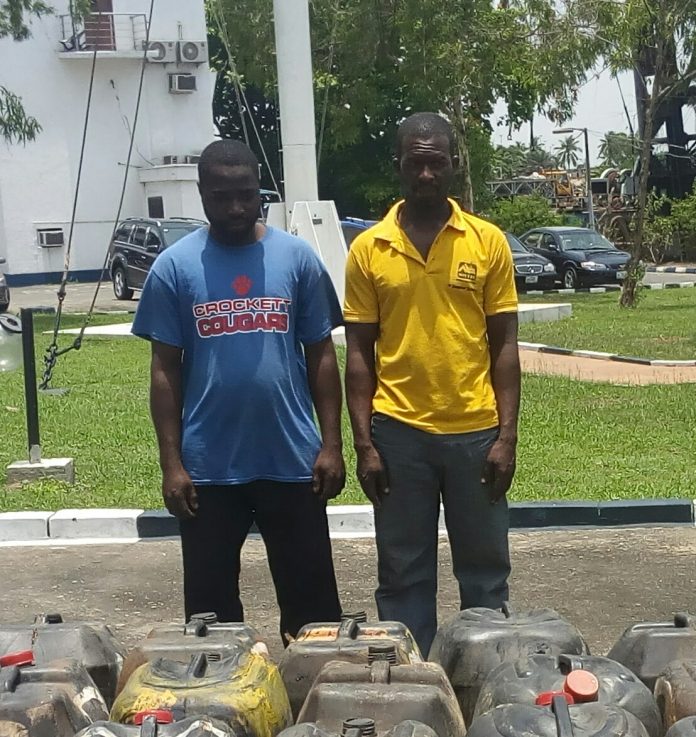 Share this on WhatsApp
Spread the love
By OKOSUN DENNIS
Ensuring that every economic sabotage is nipped in the bud; especially pipeline vandals, personnel of Operation AWATSE and a private security organisation swooped on two vandals and seized 53 jerrycans filled with PMS.
National Daily gathered that the vandals invaded the Atlas Cove to Mosimi pipeline six
days after the 76-km pipeline commenced pumping of petroleum products.
Soon after the security agents sighted them in different vehicles they were using to convey the products, they swiftly abandoned the products and escaped but not for the two of them who were arrested.
The Commander, NNS Beecroft, Commodore Maurice Eno, told National Daily in his office that “Operation AWATSE in conjunction with a private security company, Topline Leighton Limited hired by Nigerian National Petroleum Cooperation (NNPC) arrested two vandals and recovered 53 jerry cans of 50 litres each at Imagbon area of Ogun state.
He pointed out that the criminals constitute “economic sabotage and the force was ready to wipe them out. He warmed them to desist from every criminal acts and look for another vocation or face the wrath of the law.
“The maintenance of the lines was completed early in the year and pumping of products to Mosimi commenced on the 21 March, 2017.
ALSO SEE: NSCDC suspends two officers over oil theft
However, about 03:00am on 27 March, 2017, a private security engaged by the NNPC for security and maintenance of the pipelines arrested two suspected pipeline vandals.”
It was further gathered that four vehicles used for the illegal act which included: Toyota Sienna with registration number: Lagos LSR 142 BH; Volkswagen Bus: KRD 151 XM; Mazda Bus: XU 138 EPE and a Toyota Camry: VL 03 APP were recovered from the vandals.
Cdre Eno added that criminals involved in pipeline vandalism are sometimes involved in kidnappings, bank robberies and other nefarious activities hence it is imperative for the current zero tolerance for the pipeline vandalism in line with the constitutional mandate.
“We have cogent intelligence that there are other collaborators that indulge in pipeline vandalism/oil theft,” Cdre Eno reiterated.
The suspects, Mr Sulaiman Ismail, 40, from Ogun state and Kingsley Imaeto ,38, from Anambra state respectively were arrested as they were conveying the 53 jerry cans in four vehicles to where they would dispose the product.
Speaking with one of the suspects, Suliaman, explained he wasn’t a vandal but was contacted by a man simply named Rambo to convey 15 jerry cans from Ogijo in Ogun state to a village around Redemption camp for N500 each.

He further reiterated that in the process of conveying the product with his Sienna space  bus, his tyre punctured hence he had to stop to fix it. In the process of doing that, some security agents swooped on him and demanded to know what he was carrying.
“I told that I was conveying fuel for someone, Rambo, who was with me there. I 0am not a pipeline vandal but a driver contacted last Sunday by Rambo to convey the product for him before I was arrested. Immediately, Rambo was confronted, he ran away and I was arrested.”
On his part, Imaeto said one Mama Iyabo contacted him to convey the product for him. “I am not a pipeline vandal and has never participated in pipeline vandalism. I hesitated initially to convey it for them but when I looked at the way they were talking, and sensed that I could be harmed, I was compelled to carry the jerry cans for N500 each.”
However, the Commander of Operation AWATSE, Captain MB Katagum, said they will not spare any vandal. “For the fact that only few jerry cans are involved does not mean they cannot siphon a trailer of stolen products.”
Receiving both the suspects, products and the four vehicles, the Assistant Commandant, Area Command, Lagos Central of the Nigerian Security and Civil Defence Corps, (NSCDC),  Padonu Augustine said his duty was to receive them and hand over to the office for further investigation and prosecution.
Padonu commended the Nigerian Navy for rising to the occasion to frustrate the stealing of the PMS. He noted that they would continue to work together to ensure that every economic saboteurs is not only arrested, but prosecuted.
Share this on WhatsApp