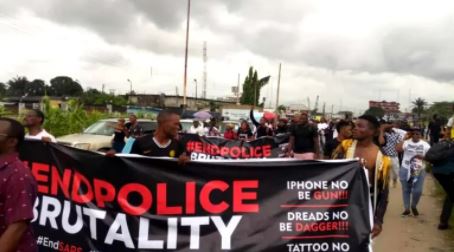 The Oyo State Police Command on Tuesday threatened youths in the state with strict sanctions against the planned #EndSARS Anniversary holding on Wednesday in across the country. But the youths, on Wednesday defied the threat and embarked on mass action to commemorate the one #EndSARS anniversary in the state.

The Commissioner of Police, Ngozi Onadeko, had in a statement in Ibadan by the Police Public Relations Officer, Wale Osifeso, cautioned to anyone with the intention to mark one year #EndSARS anniversary in the state to abandon the action or face the wrath of the law.

The CP had declared: “The Oyo State Police Command through intelligence availed to it has unraveled clandestine plans by groups of misguided people embark on large scale violent protests in parts of the State in commemoration of one year anniversary of the unfortunate October ENDSARS saga.

“Consequent upon this, the Commissioner of Police, Oyo State Police Command, CP Ngozi Onadeko, is appealing to individual(s), groups and most importantly architects of these sinister plans, to have a rethink as the Command would not hesitate to use any legitimate means necessary within the ambit of the law to enforce sanity and prevent needless loss of lives and wanton destruction of private and public properties including critical government infrastructures which could emanate from the proposed protests.”

The Commissioner of Police vowed that operational, intelligence and tactical assets would be strategically deployed across every the State to compliment and neutralize any threat or act(s) capable of truncating the relative calm enjoyed by the citizenry.

However, the police could not restrain the youths from expressing their freedoms and liberties. Hundreds of youths were on the streets on Wednesday to commemorate the one year #EndSARS anniversary, particularly, the #Lekkitollgateshooting by security operatives.