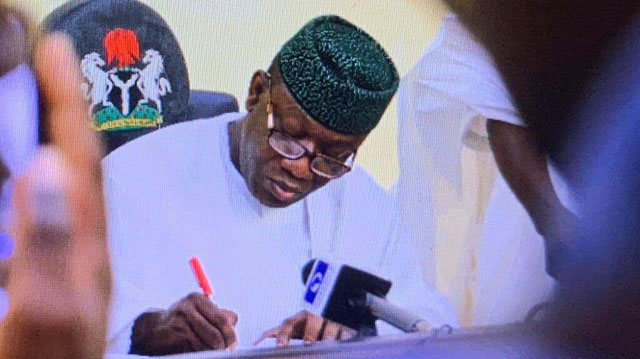 Governor Kayode Fayemi of Ekiti State on Friday signed the 2022 Appropriation of ₦100, 753,993,241.60 into law, after the State House of Assembly has passed the proposed budget.

The Speaker of the Ekiti State House of Assembly, Rt. Hon. Funminiyi Afuye, had submitted the 2022 budget, titled: “Budget of Legacy and Consolidation” to Governor Fayemi at the Executive Council Chamber, Governor’s Office, Ado Ekiti. The budget return by the Speaker and signing by Governor Fayemi was witnessed by the Ekiti State Deputy Governor, Bisi Egbeyemi; the House Deputy Speaker, Hakeem Jamiu; including Commissioners and other members of the State House of Assembly.

The budget has 60 per cent recurrent expenditure and 40 per cent capital expenditure. Governor Fayemi explained that budget will be used to complete several projects in the state, which include the Ekiti Cargo Airport, the Ado-Iworoko section of the Ado-Ifaki Road, renovation of township roads, the commencement of the construction of farm roads across the state, completion and equipping of the Intensive Care Unit (ICU) at Ekiti State University Teaching Hospital (ESUTH), construction and renovation of schools, provision of learning materials to students, completion of ongoing erosion and watershed management project, foundation laying for Ekiti Knowledge Zone and the Special Agriculture Processing Zone, etc.

Governor Fayemi promised to complete all ongoing legacy projects and consolidate on other achievements recorded in the past three years. He added that the administration will ensure that enduring legacies are handed over to successive governments with a clear blueprint of development plans to lift Ekiti into sustained prosperity.

The Speaker of the House of Assembly, Rt. Hon. Funminiyi Afuye, had noted that the budget was guided by strong fiscal policies with strategic focus on the five pillar of Governor Fayemi’s administration. He added that it reflected the yearnings and aspiration of the people of Ekiti State.