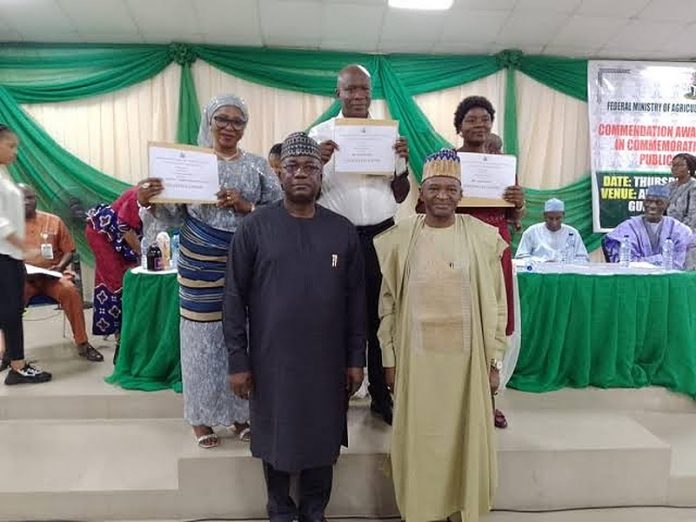 The Federal Government has recognised 38 deserving officers of the Ministry of Agriculture and Rural Development who distinguished themselves in their duties.

The Minister of Agriculture and Rural Development, Dr Mohammad Abubakar, said this during the presentation of the awards to the officers on Thursday in Abuja.

Abubakar said that the awards followed the directive from the Head of Service of the Federation for all Ministries, Departments and Agencies (MDA’s) to mark 2022 Public Service Celebration on 23 June.

He said that government deemed it necessary to recognise deserving officers who had distinguished themselves in their duties thereby, making contributing to the realisation of the mandate of the ministry.

” The Nigerian Civil Service as the engine of governance should be celebrated considering the significant role they play in the society.

” I throw this challenge to both professionals and service departments, the challenge is what and what did you do differently within your schedule that makes the difference in the discharge of that responsibility.

” We should not expect an award on a platter of gold, rather our little contribution in the way and manner we carry out our assignments goes a long way in bringing about the desired change and progress,” he said.

The minister urged everyone to start changing from within, if the expected change from outside were to be realised.

Abubakar congratulated the permanent secretary, the organisers and the awardees for achieving the great feat, saying “I congratulate everyone, I wish you success and l am really proud of you all.”

Also speaking, the Permanent Secretary, Dr Ernest Umakhihe, said that the selection was based on merit and attitude to work.

Umakhihe commended the awardees for their hard work, dedication, competence and exceptional level of commitment in the discharge of their duties.

” The event is organised to celebrate and honor our deserving officers who have distinguished themselves in contributing immensely to the realisation of the mandate of the ministry through dedication, hard work.

” Also through productivity, innovation, efficiency in service delivery, regular attendance to work and commitment to duty.

” It is expected that this would spur other officers to exhibit similar virtue and be more productive,” he said.

” You have set a standard for others to emulate, believing that you will equally not sustain but surpass the present height you have attained ,” she said.

In her response, on behalf of the awardees, the Zonal Director, South West Zonal office, Ibadan, Mrs Folashade Abimbola -Oguntuyi, said that the Civil Service was all about having role models/ mentors, who paves way for success.

Abimbola -Oguntuyi, who expressed gratitude to God, told NAN that people should be dedicated to their jobs wherever they find themselves.

Another awardee, Mr Ojo Michael, of the Human Resources Department of the ministry, said the recognition by the ministry was the reward of his hard work.

” Whatever you are doing, don’t let money be an issue, this is the reward of my hard work,” he said.