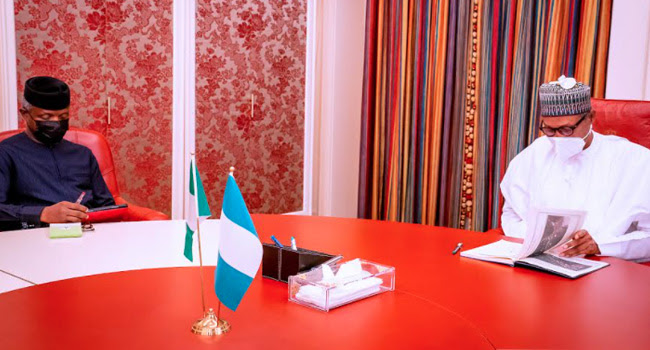 There was a seeming mix-up in the Nigerian presidency as President Muhammadu Buhari received a briefing from Vice President Yemi Osinbajo on resumption to duty on Monday on his return from the 16 days medical vacation in the United Kingdom. This is contrary to the earlier statement from the presidency on the departure of the president to the UK a fortnight ago, that the president can govern the country from anywhere, using the internet and did not need to transmit power to the VP.

However, President Buhari on Monday was briefed by the Vice President on the state of the nation as he resumed duty.

On the departure of the president to the UK, the Senior Special Assistant to the President on Media and Publicity, Garba Shehu, had said: “It is a routine medical check-up; the President has undertaken this with a set of doctors that he has retained over many years.”

The SSA had noted that President Buhari did not transmit power to Vice President Yemi Osinbajo, stating that the President will not be away for so long to contravene the law.

According to Garba: “The requirement of the law is that the President is going to be absent in the country for 21 days and more, then that transmission is warranted. In this particular instance, it is not warranted.”

Contrary to all the statements, President Buhari on return from the UK, and resumption of duty, gave audience to Vice President Yemi Osinbajo to brief him on the state of the nation while he was away.