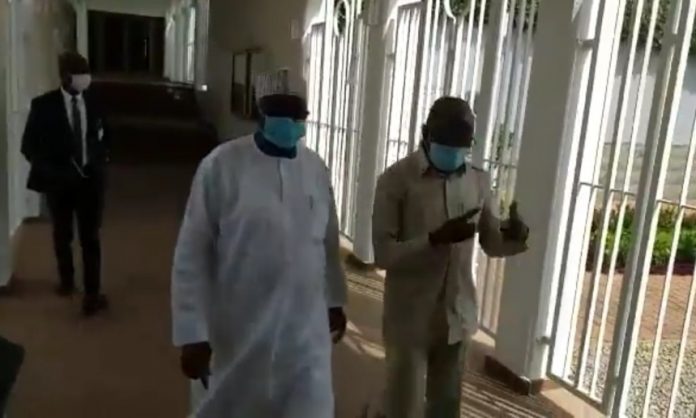 The National Chairman of the  Peoples Democratic party (PDP), Prince Uche Secondus, on Thursday re-echoed the party’s RED alert over the leaked video revealing alleged secret plots between the ousted National chairman of the All  Progressives Congress (APC), Adams Oshiomhole, and the Chief of Staff to the President, Prof. Ibrahim Gambari, on Monday. He alleged that Oshiomhole was smuggled into the presidency to perfect APC rigging strategy for the Edo governorship election.

Secondus at a press briefing, bemoaned that the threat to democracy in Nigeria is becoming more and more real by the day. He said that the PDP has watched with utmost concern the developing situation in Edo State. He added that the party has watched the growing desperation of the APC, and the Presidency to subvert the popular will of the people and capture Edo State in the September 19 gubernatorial election at all cost.
“We are deeply saddened that under the watch of an elected President, Muhammadu Buhari, who is a huge beneficiary of democracy, the nation’s highest seat of power is being used for the hatching of plans to undermine democracy.
“The Chief of staff to the President, Prof Ibrahim Gambari, is such a strategic staff that when he is involved in any underhand thing, the President cannot free himself from it,” Secondus declared.
According to the chairman, the PDP, therefore, called on the National Assembly to call for the tape of the video and examine thoroughly its content with a view to acting appropriately.
Secondus protested that the constitution and the Electoral Act are clear on this type of blatant undermining of democracy by clamping down on the opposition.
“It’s very unfortunate that the numerous problems overwhelming the nation is not disturbing the President and his party but they are engaged in planning how to blackmail and arrest the opposition.
“It’s also in our findings that the several efforts of APC leaders to arm-twist the INEC into falling for their

devious move to shift the election.
“All these anti-democratic moves are all aimed at one thing, creating a constitutional logjam to disruption the election because they know they cannot win.
“As all these underhand moves are crumpling before their eyes, the discredited former Chairman of APC was smuggled in Aso Rock Villa to fine tune the rigging strategy for Edo.
“The leaked video which has been confirmed by the Presidency says it all the plan to arrest and keep away all opposition leaders and clear the way for the rigging machinery of APC to roll through,” Secondus declared.
The PDP chairman  stated that “this development is not only shameful but very unfortunate that the nation’s seat of power housing a democratically elected President has to be used to plan how to inflict harm on democracy.”
the PDP National Chairman, therefore, declared further: “We call on both the INEC and the Judiciary to stand firm in defence of democracy and not yield to the manipulative tendencies of APC and its governments.
“We wish to also draw the attention of the international community to this gross abuse of planning to undermine Democratic process by critical staff who should defend it.
“We demand appropriate sanction of the individuals involved in this anti- democratic act, they should be given visa restrictions  to any democratic countries.
“The interest and will of the people of Edo State should be paramount in all decisions and that should guide any action either by the INEC or the government.”

He maintained that the PDP remains vehemently opposed to any postponement of Edo and Ondo states governorship elections; adding that September 19 and October 10 should be sacrosanct.

Secondus subsequently advocated that Nigerians should declare anybody or group working to truncate the ongoing electoral processes for Edo and Ondo states as enemies of democracy who want to inject crisis in the two states by undermining the will of the people.