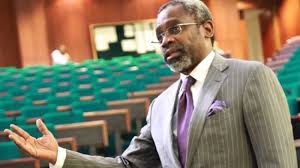 House of Representatives leader, Femi Gbajabiamila has defended the N100 Benz G-Wagon he bought his wife, Yemisi, for her 50th birthday on Monday.
Many Nigerians came down hard on the lawmaker immediately the news broke out, accusing him of insensitivity to the plights of many Nigerians who lived in abject poverty while lawmakers bleed the country dry.
In a statement made available to National Daily on Wednesday, the lawmaker said the gift was simply an expression of deep appreciation and love for his wife of almost thirty years, rather than one of flamboyance.
“My attention has been drawn to the extensive reports especially on social media regarding the presentation of a gift to my wife and best friend in celebration of her 50th birthday anniversary.
“The presentation of the gift contrary to public perception, was to be a family affair in our home but it suffered some delays finally arriving when a number of guests were in to celebrate with my wife. It still would have remained a private affair, but I guess we underestimated the power of social media and very excited friends.”
“Having said this, I understand and appreciate the reaction of the public. As a public official, one must be held to a higher standard. My action was not meant to offend sensibilities and I regret that it did. “
He said being a leader in many spheres, he understands the optics of it. “. But I would rather want it to be seen as what it is. An expression of deep appreciation and love for my wife of almost thirty years, rather than one of flamboyance.”
He said while the monetary value of any gift real or imagined, pales in significance when he considered how much of a ‘rock and pillar’ his wife has been to him, he remain truly committed to his values of improving lives for the  constituents he represents and Nigerians at large.