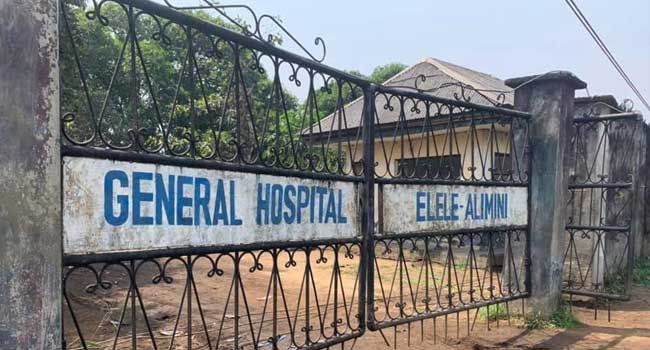 A government hospital at Elele Alimini, Emolua LGA, has been a den of criminals and a dump of dead victims for as long as nobody can ascertain yet.

Chidi Lyold, the chairman of the LGA, and security agents however discovered on Thursday no fewer than 30 decomposing bodies kidnappers dumped in one of the blocks of a general hospital long abandoned in the area.

The search was originally for illegal oil barons and refiners in the area.

Lyold was amazed to discover most of the dead bodies were suspected kidnapped victims.

“Irked by the number of already decaying corpses deposited inside a particular building in the hospital, the council chairman ordered the security personnel to search the entire hospital, during which the syndicate and illegal occupant of the hospital were apprehended in their hideout,” Bright Elendu, the media aide to the chairman said in a press statement.

“The council chairman also effected the arrest of some perpetrators of the illegal oil bunkering intercepted in course of the operation.

“The council chairman and his team also effected the arrest of two drivers who were caught transporting illegally refined petroleum products at Rumuekpe junction along the East-West road,” the statement said.

Lyold vowed to prosecute those involved in the criminal activity, including traditional leaders complicit in the matter.

Police have not spoken officially on this.