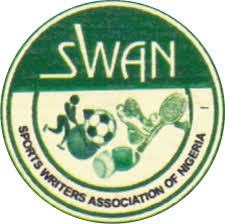 Chairman, Abia Warriors Football Club of Umuahia, Pastor Emeka  Inyama says his administration has  built sustainable structures that will stand the test of time and keep the club at the highest level of professionalism even in the years to come,Nationally Daily learnt.

Pastor Inyama was speaking in Umuahia when he received in audience, members of the Abia State Chapter of the Sports Writers Association of Nigeria (SWAN) who paid him a courtesy/thank you visit in his office.

According to him, Abia Warriors under him is run professionally and with the highest international standard hence, the plethora of achievements that have been recorded over the years.

He named some of the achievements to include the acquisition of a 40- hectare land for the construction of the club’s permanent site, the construction of a 20-room  modern club camp, the establishment of the first functional U-13 & U15 academy by any club in the country as well as the hosting of youth tournaments at various times in order to further expose the players to the the rudiments of game, among several others.

He commended Abia SWAN for a peaceful and hitch- free election and  hand-over and challenged the new executive led by Prince Vincent Obike to strive to take the association to the next level and endeavour to carry all their members along.

Earlier, Prince Obike said the visit was to thank the Abia Warriors Chairman for his immense contributions towards the election of his executive and for his assistance to the association over the years and wished he will not relent.

Prince Obike used the opportunity to remind the Chairman that the ‘SWAN week’ which will feature many activities including a sports summit will soon commence and expressed happiness that Pastor Inyama has promised to be fully involved in it.