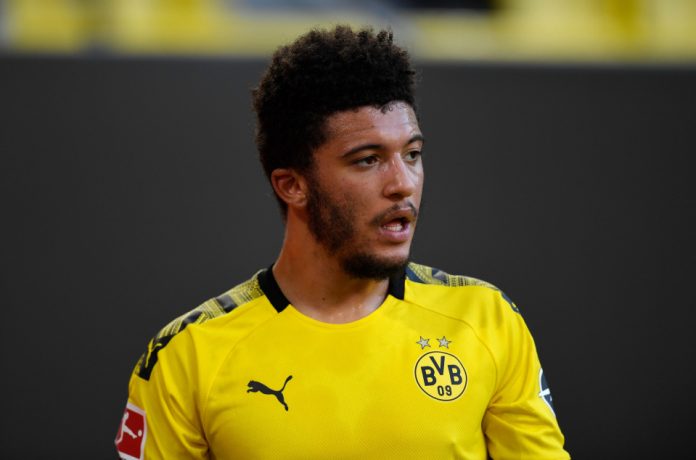 It has been reported that the young England sensation Jadon Sancho is presently in UK where he was spotted in the company of two United supporters rap duo of Krept and Konan.

Meanwhile, reports reaching National Daily reveal that Borussia Dortmund who reacted to the development have maintained that they have no problem with Jadon Sancho travelling to the UK following the emergence of images of the winger at a party in London.

National Daily can confirm that Dortmund have previously set a deadline of August 10 for Manchester United to complete a deal for Sancho, who is the club’s top target this summer.

“It’s common and fine for players to go home before a training camp if they’re not risky,” Dortmund’s director of media and communication Sasha Fligge said.

“The same goes for Jadon [Sancho]. From our point of view, the pictures that have been shown to us so far do not violate.”

Manchester United are attempting to get a transfer deal over the line for Jadon Sancho.

The Red Devils have been chasing Sancho for some time and the player is reportedly eager to make a deal happen.

Borussia Dortmund’s price tag of £108 million remains a stumbling block but Sancho’s potential wage packet has already been detailed ahead of a potential switch to Old Trafford.

National Daily can further confirm from the recent report by MailOnline that Sancho is set for a bumper £340,000K a week contract at United if and when he officially completes his transfer back to the Premier League.