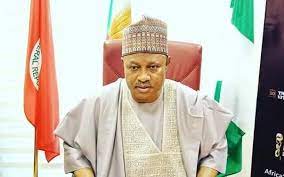 The governorship candidate of the All Progressives Congress (APC) in Kaduna State, Sen. Uba Sani, has promised to build on the achievements of Governor Nasir El Rufai of Kaduna State.
Sani, representing Kaduna Central at the National Assembly, at a town hall meeting in Kafanchan, Jema’a Local Government Area, had an engagement with different groups at the meeting including traders, farmers, women, youths, religious groups and trade unions.
He said that building on the giant strides of the El-Rufai administration in education, healthcare, agriculture, youth and women empowerment is necessary to ensure sustained development in the state.
“We are all aware of the transformation that is going in our dear state under the watch of El-Rufai.
“I will build on these developmental programmes to take our state to even greater heights,” he stated.
Sani said that only projects that have direct bearing on the lives of the people would be given priority by his administration.
He said that his exploit at the senate had prepared him well for the task of governing the state.
“When running for office, it is important you show the people your achievements in the last public office you held.
“I have sponsored numerous bills and remain the only senator to have two bills passed and assented to by the president.
“But the same cannot be said about my main rival candidates of the PDP and Labour Party who were members of the national assembly some years ago.
“The PDP and Labour Party candidates spent eight years and four years respectively in the green chamber without sponsoring single bill,” he added.
On the issue of security, he said that creation of state police and giving constitution roles to traditional rulers was the only way out.
In her remarks, the APC deputy governorship candidate and the incumbent deputy governor of Kaduna State, Dr Hadiza Balarabe, said a vote for the APC was a vote for an assured future.
Balarabe said that the town hall meeting was convened to get the inputs of the people of the zone before the release of the candidate’s manifestos to the public.

Insecurity: Ondo to spend N3.2billion on security hardware for Amotekun, others