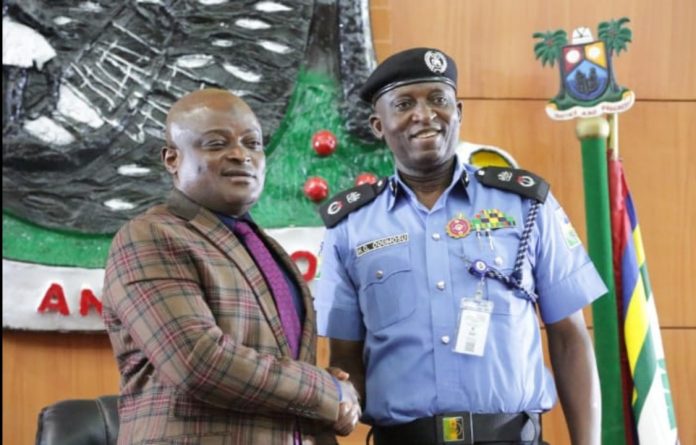 Share this on WhatsApp
Spread the love
Lagos state House of Assembly has cautioned the police officers serving in the state against harassment, intimidation and extortion of residents if they wanted to be respected.
The House said this on Wednesday through the Speaker of the House, Rt (Hon) Mudashiru  Obasa, when outgoing Commissioner  of Police, Mr. Hakeem Odumosu, who was recently promoted to the rank of Assistant Inspector-General of Police and due for retirement in January 2022, made a thank you visit to the lawmakers.
Obasa said Odumosu was honoured as the first commissioner of police in the state to stand before the lawmakers in the hallowed chamber and address Lagosians on his experience and issues with policing Lagos because he is considered to have effectively managed the security of the state.
The Speaker thanked Odumosu for his openness and responsiveness each time there were issues affecting the peace of the state.
“It is important to call on those behind you to know that the relationship between the police and the people need to be constantly improved upon,” Obasa said adding that men of the Nigeria Police Force needed to build more trust among the people and make the latter know they are truly being served.
“Everybody must be treated with respect, dignity and honour and that is how w can earn our respect. Policing should not be about harassment and extortion but building trust among the people and making them comfortable,” Obasa advised.
In his contribution,  Hon. Rotimi Olowo  (Somolu 1) described Odumosu as a true Lagosian and hardworking policeman, adding that his style of policing was dynamic and people-oriented.
“You ar a true Lagosian and hardworking. Your type is very few in police. You are very accessible to all.  You have shown that you are a great police officer per excellence. The way you waded in during crisis when called upon and reconciled parties involved were meticulous and professional. God will continue to strengthen you as you are retiring”, said Olowo.
Hon. Victor Akande ( Ojo 1) commended Odumosu for his success adding that his experience would always be needed in the state even after his retirement.
“I thank God for you on the successes you have recorded in your career. You make Lagos safe and safer for the people of the state. Even as you will be retiring soon, your experience would still be needed in the state”, said Akande.
Taking a swift on the police, Hon. Ibrahim Layode (Badagry 1), charged him to caution his men operating on Agbara-Bagagry road before retiring, adding that the officers have been making life unbearable for road users.
Earlier, the Commissioner of Police, who led a team of officers to the House, thanked the lawmakers for their support. According to him, nothing could have been achieved in terms of security and peace in the State without the assistance of the House led by Speaker Obasa.
He said he would remain grateful to Lagos and Lagosians for making it possible for him and his team to effectively manage the security of the state and making it the most peaceful in the country.
Odumosu, who described Lagos as a mini-Nigeria, noted that the proactiveness of the Lagos Assembly resulted in the laws that have helped the police remain successful in the state. 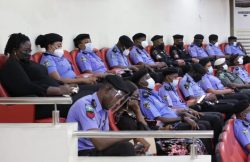 He said the Cultism Prohibition Law, has helped to reduce illegal associations in tertiary institutions in the state and also helped with adequate enlightenment of property owners and residents.
He listed other laws that have helped the police to include the Land Use Charge amendment law which has reduced the activities of land grabbers, the Anti-Open Grazing law, the Neighborhood Safety Corps law, which has ensured synergy among security agencies, the Coronavirus Pandemic Law, which enforcement helped reduce the spread of COVID-19, the Transport Sector Amendment law, which has helped with traffic management and the law stopping parade of suspects to protect their fundamental rights.
“We promise to continue to excel in providing water-tight security for the people of the state,” he told the lawmakers.
He also promised that he would encourage his successor to sustain the relationship between the police and the House while urging the lawmakers to extend their support to whoever will take over from him.
“Policing Lagos is not a tea party. Without the laws in Lagos, it would have been difficult to police the state. Don’t get tired, don’t relent in making the laws that would make Lagos state maintain its place as the most peaceful state in Nigeria,” he urged.
Share this on WhatsApp