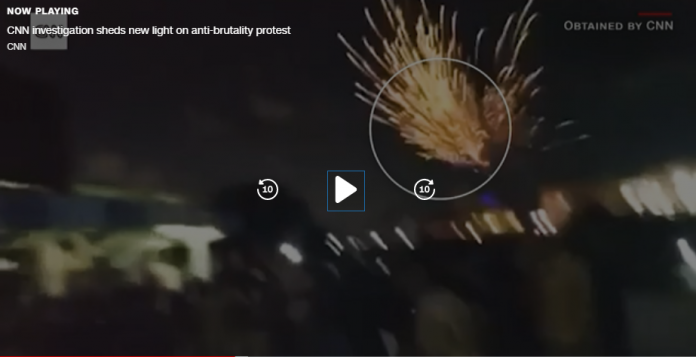 Close to a year after the October 20 Lekki shooting during Endsars protest that rocked Lagos and the entire country, lies, media puffery, and truth are being sieved now.

A UK-based ballistic analyst contracted to investigate the alleged shooting said the soldiers dispatched there didn’t fire live ammunition.  The firm also identified non-military weapons used, and stated that two—of all the ballistic injuries it gathered — happened on the night of October 20.

Oxygene Consulting said the military-grade weapon used came later in the night, and were used by yet-to-be-identified persons who probably aimed the weapons at surfaces other than the protesters.

The company lead consultant Dieye Willie-Harry would not make much of the videos the Amnesty International, CNN, activists, rights lawyers, and local media houses relied on for their deep-dive investigation.

“We have not viewed any footage, which definitively shows a muzzle aimed towards any individual and at the same time being fired with the effect thereof, with what we can freely assess to be firing live ammunition (no flailing or falling injured victims),” Willie-Harry said via Zoom on Tuesday, according to Premium Times.

“However, given the injuries sustained from 21:00 hrs and further, we believe, that live, military-grade ammunition, was fired at some point, by persons as yet to be identified.”

According to Willie-Harry, the team was engaged by the government 10 days after the shooting incident to conduct medical, ballistic, and forensic injury analysis of the incident.

So by the time the investigation started, “the medical treatment of victims had reached an advanced stage, injuries had healed and victims had been discharged from healthcare centers.

“The ability of the victims to give reliable accounts of how, when and where, their respective injuries were sustained, may have deteriorated, or been contaminated by exterior influences and the passage of time,” he said.

But his team relied on, and probed medical reports and x-rays of the victims who were treated at public and private hospitals in Lagos.

The forensic investigator further said the medical data studied included the timeline of arrival at medical facilities and the nature of the injuries sustained by the victims brought to the facilities.

“No military-grade live ammunition (high-velocity) fired at the protesters, at Lekki Toll Gate, on 20 October, last year within the timeframe of 6:30 p.m to 8:34 p.m,” he said, adding the military-grade ammunition was used later, after 9 p.m.

Four victims of gunshots, who reported at hospitals between 7:05 p.m. and 7:45 p.m on the day of the shooting were examined.

“The wounds sustained by the victims can be safely identified as being discharged by either low-velocity calibre and/or artisanal/12 gauge firearms.

“The team is unable to ascertain, how, by whom, where and when exactly these GSW [gunshot wounds] injuries were sustained, due to the apparent breakdown of law and order, prevalent during the day, afternoon and evening of 20/10/2020, in Lagos at the time of the alleged Lekki incident.”

He said a total of eight injuries were “commensurate with 7.62 x 39mm (law enforcement grade ammunition), and only two were recorded on the night of October 20, last year. The remaining six were recorded between October 21 and 22, last year, according to medical reports.

There were 11 firearm injuries, but were not commensurate with 7.62 x 39mm, non-law enforcement grade ammunition, he noted. He said the injuries are from artisanal weapons, locally-made weapons that are classified as small arms, and light weapons (SALW).

“What is, however, certain, is that had the military personnel, deliberately fired military-grade live ammunition, directly at the protesters, there would have been significantly more fatalities and catastrophic injuries recorded. This was clearly not the case,” he said.

The forensic investigator said military-grade ammunition, if fired into a mass of human tissue at close range by military personnel who are trained by default to aim for the central body mass, would have undoubtedly resulted in a large number of victims, with fatal, catastrophic thoracic and head injuries.

“Apart from the sworn statement by the military spokesperson at the Lagos State Tribunal, the team observed, on examined video material, that the military was firing blank ammunition. This is due to the repeated arming of their weapons to reload, before firing into the air,” he said.

But he mentioned the team’s observation and examination of the open-source imagery and news reporting, including the social media, which showed that “the military fired live ammunition at some point.”

He however stated the team’s expert opinion.

“Along with the individual injuries and medical reports, we are of the opinion that ‘live’ military-grade ammunition, may have been discharged at some point at the Lekki Toll Gate on 20th October 2020, after 21:00 hrs and, possibly, aime, at the road surface in front of protesters.”

The expert said the live ammunition hit the “majority of the victims in the lower limbs at much reduced kinetic energy but with enough energy to fracture the long bones without exiting the victims’ bodies.”

He said injuries of this category were recorded around 9:30 p.m according to the time stamp on medical records.

“The team has identified the firearms carried by the military officers, during the alleged incident, as Kalashnikov AK type variants including Chinese Type 56, some with (foldable bayonet) extended. These weapons discharge the 7.62mmx39 Type 56 / PS.”

(CNN in its ow investigation claimed the ammunition originated from Serbia)

Following his testimony, the expert was cross-examined by lawyers to the police, #EndSARS protesters, and the Nigerian Bar Association.

Doris Okuwobi, a retired judge heading the panel, said the expert’s testimony would be the last the panel would take before giving its ruling on the shooting incident.