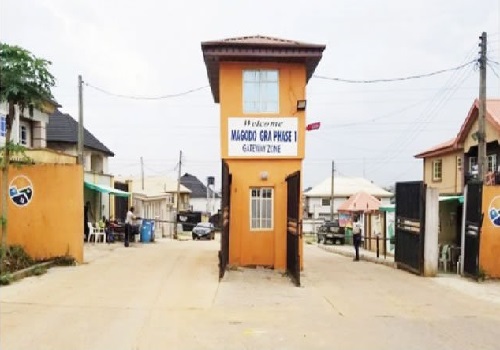 Share this on WhatsApp
Spread the love
By Celestine Mel
The false  narrative in social media regarding the police action in Magodo Estate Lagos confirms that indeed, the media can be truly manipulated to mobilize citizens against authorities especially by those who have the means and the power to do so. The insinuation that the police were in Lagos illegally or that the scene wherein Governor Jide Sanwo-Olu personally went to question the presence of policemen in Magodo Estate in negation of his role as the CSO of Lagos State, and a confirmation that indeed the Nigerian structure is defective, does not apply itself to the facts of the matter. It’s a matter I have  taken time to research on, and I dare say, the Governor of Lagos is an interested party in the entire shameful display of lawlessness in Magodo.
By obstructing the police from executing a valid order of the Supreme Court of Nigeria, it is clear that the big web of conspiracy to hinder law enforcement from carrying out its job, would never give up until the last blood is drawn. It is the height of our collective descend into anarchy.
This is what I know of the matter and why I made the statement above.
A military governor in the 1980s forcefully and deceitfullly evicted lawful residents and land owners in the magodo area of Lagos from their ancestral lands under the cover of public interest, claiming that government wanted to build an international hospital in the land. No compensation was paid. The victims watched helplessly as the government instead converted the land to an housing estate, shared among friends and families of their cronies and elites. The victims approached the court to seek redress. The court issued an injunction to stop all parties from further development of the land during the pendency of the matter. Lagos State government then (as usual) ignored the injunction. Development of the land into Magodo estate continued. Until the matter was finally settled by the Supreme Court of Nigeria in 2012.
In the final judgement, the Supreme court restored the rights of the Magodo Landlords Association over the land and awarded cost against the Lagos State Government. It also directed the litigants to repossess their land.
This judgement of the Supreme Court was ignored by Lagos State and the illegal occupants of the estate continued to stay. The landlords association, unable to execute the court directive, went back to ask for help from the Supreme Court. Rather than obey the last court in the land, Lagos State similarly further went to a High Court to initiate another process to stop the execution of the order of the Supreme Court. The government went further to invite the judgement creditors for a negotiated settlement. It offered them replacement land in Epe LGA. The creditors refused the offer and insisted that the order of the Supreme Court should be obeyed and Magodo should be vacated. Lagos refused to give effect to the judgement . There was a stalemate.
At the Supreme Court The litigants further approached the Supreme Court the IGP wsd directed to enforce the judgement to enable the litigants repossess their land.
Above is the reason policemen were mobilized from force hq Abuja to accompany the judgement creditors to repossess their land in Magodo. On getting there, the occupants of the property who by the Court order are presently deemed as illegal occupants, staged a firece resistance against the police. They barricaded the estate, mobilized themselves into a strong army to resist attempts by the police to enforce an order of the Supreme Court. They have feigned victims and are using all sorts of tactics to stall the execution of the order. We have to note that the same residents previously used their connection within the society and government at different levels to stall the execution of the Court order from 2012 to date.
And if I may ask, what sort of country would we have if a judgement of the Supreme Court – the highest court in the land, cannot be executed because powerful people are involved? Between the illegal occupants and the restored owners of the property, who shoukd indeed cry of being wrongly treated? Did we take a look at that old blind man yesterday? He must have been lucky to be alive. Others I learnt have died seeking justice over the Magodo matter. The police is absolutely right to have gone to that place to give teeth to the order of the highest court in the land. Unfortunately, those who illegally coveted the land are the ones crying victim today while the police which is doing its job is being hounded.
The only remedy available to the Lagis State Government is to relocate the illegal occupants of the estate to another place so that the judgement creditors may take their rightful property. All the theatrics and rigmaroles including seeking injunction in a high court and inviting parties to settlement is diversionary. It is an exercise in futility.  The judgement of the Supreme Court *MUST* be enforced to the fullest at a heavy cost to those who created the mess.
The Magodo matter should be a lesson for those who believe in absolute power. There comes a time when Daniel would come to judgement. That time is now for the hapless citizens who invested billions in the illegality called Magodo Estate.
This has nothing to do with the structure of Nigeria. Don’t fall for that propaganda.
● Celestine Mel writes from the FCT.
Feedback on WhatsApp : 08088188805
Share this on WhatsApp