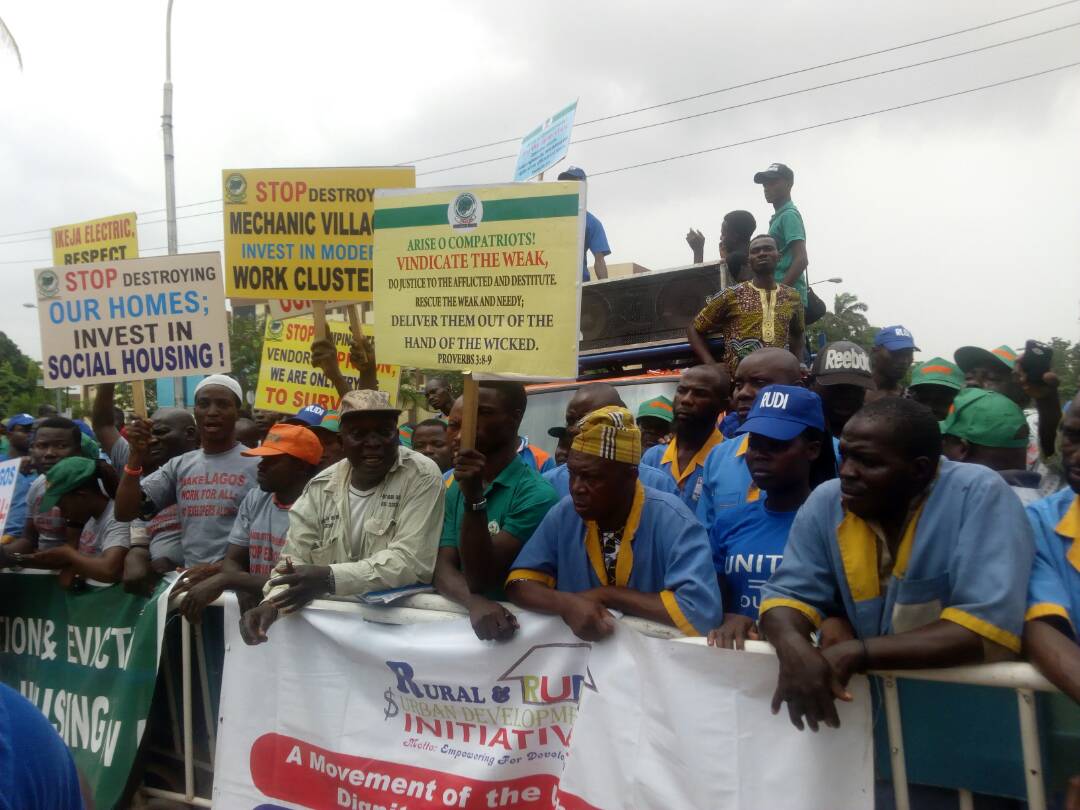 Share this on WhatsApp
Spread the love
Lagos State residents, piqued by what they regarded as government  deliberate move to further pauperize the poor communities,by indiscriminate demolition and occupation of their land space,have stage a protest to the seat of power in Alausa, to demand reversal of harsh policy foisted on them.
The placard wielding protesters who came under the auspices of the Federation of Informal Workers Association of Nigeria (FIWON), register their displeasure on the illegal and deliberate demolition of buildings and markets often occupied by struggling people in the informal sector of the economy.
Inscriptions on their placards reads:”Scrap Lagos State Task Force;It’s an Extortion Racket!”,Stop Destroying our Homes,Invest in.  Social Housing.”,”Stop Destroying Mechanic Villages, Invest in Modern Work Clusters”, “Ikeja Electric Respect ILO Convention”, “Make Lagos Work For All:Not Developers Alone” and more.
According to them, any government that fails to recognise the roles played by people in the informal sector in governance, and chooses to embark on the demolition of their houses and businesses, is sowing the seed of failure both in the short and long run.
The group which comprises mechanics, market traders, and farmers, among others, was led by the General Secretary of  FIWON, Mr Gbenga Komolafe, who accused the Lagos State government of using the state’s megacity dream as an avenue to fleece hapless residents of their lands, markets and businesses.
“The Lagos State government has been trespassing on the rights of the informal sector. They use officers of the state’s taskforce to intimidate law abiding residents who are going about their normal businesses,” he said.
ALSO SEE: Buhari moves to mitigate deepening cracks in APC
“They harass and lock them up in prisons. Now, we understand that due to lack of space at Kirikiri, those arrested are now taken to Badagry. Sadly, when they come back from these prisons, most of our people do so in vegetative states, and some have even died,” he added. 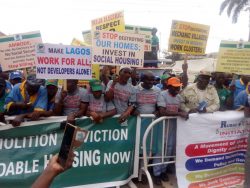 Speaking further, Komolafe challenged the state government to build a megacity that would conform with the all-inclusive vision of the United Nations, rather than its current moves of “creating a city for a few.”
However in his reaction, the Special Adviser to the Governor on Transport, Mr Olanrewaju Elegushi, promised to convey the message of the protesters to the State Governor, Mr Akinwunmi Ambode.
He stated that the Ambode-led government was a government with a human face, and as such would not do anything against the law, and neither would it do anything that would undermine the well-being of residents of the state.
“Everything you have said has been taken note of, and it would be channeled to the appropriate quarters. I can assure that your complaints and plights will be critically looked into, and very soon, you will hear from the government,” he said.
One of the market heads who also ventilate her anger over the development, stated that often times the KAI squad raided their markets whares carted away are not returned after the whole encounter, while those arrested pay through their nose to get released, not minding the fact that they were ones who voted not the elites.
Comrade Agbodemu Ishola Musibau also critiqued the essence and sincerity of the mega city concept, citing the fact millions of Lagosians are now homeless no thanks to it.
“Mega city for 22million Lagosians or for few? Homes and houses sold at N500million who would buy? Millions of Lagosians now homeless due to incessant demolition exercise,we do not object mega city, but government should make affordable housing scheme a priority.
Share this on WhatsApp
Related Topics:DemolitionFederation of Informal Workers Association of Nigeria (FIWON)Protest
Up Next

Bank cleaner dragged to court for stealing  over N 150,000 phone