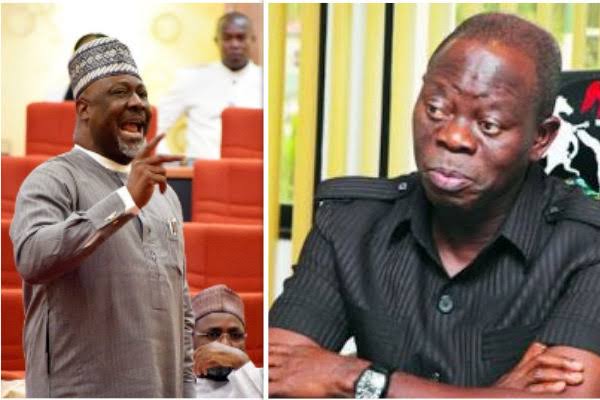 Senator Dino Melaye has fired back at the National Chairman of the All Progressives Congress, APC, Adams Oshiomhole, ridiculing him that he is suffering from “verbal diarrhea.”

Dino Melaye, candidate of the Peoples Democratic Party, PDP, in the Kogi West senatorial inconclusive rerun election, took Oshiomhole to the cleaners over his statement that Nigerians have punished all 16 senators that decamped from APC with  Bukola Saraki, former President of the Senate,, adding that the punishment of Melaye will soon be concluded.

Oshiomhole at the State House after a meeting with President Muhammadu Buhari in Abuja had remarked in a media interaction that Nigerians have punished all the Senators that rebelled against the APC, adding that Melaye’s punishment would soon be completed after the rerun election in Kogi State.

Meanwhile, the supplementary election on the inconclusive rerun election declared by the Independent National Electoral Commission, INEC, would be conducted on Saturday, November 30, 2019.