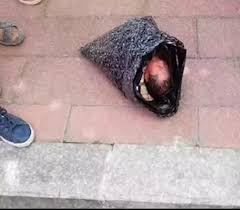 Monsuratu Arogundade, the 23-year-old mother who dumped her bby on the street of Ugbe Akoko, Ondo, last week will not be prosecuted.

Some Good Samaritans picked up the child and reported the matter to the police.

The baby was later handed over to officials of the state Ministry of Women Affairs and Social Development.

The mother would later claimed she lost her mind when she dumped the baby.

“I want to beg the government to pardon me and release my baby to me; I didn’t know what I was doing that day; I lost my mind at that period,” she stated.

The state Police Public Relations Officer, Mr Femi Joseph, said the young mother was not prosecuted because of the baby.