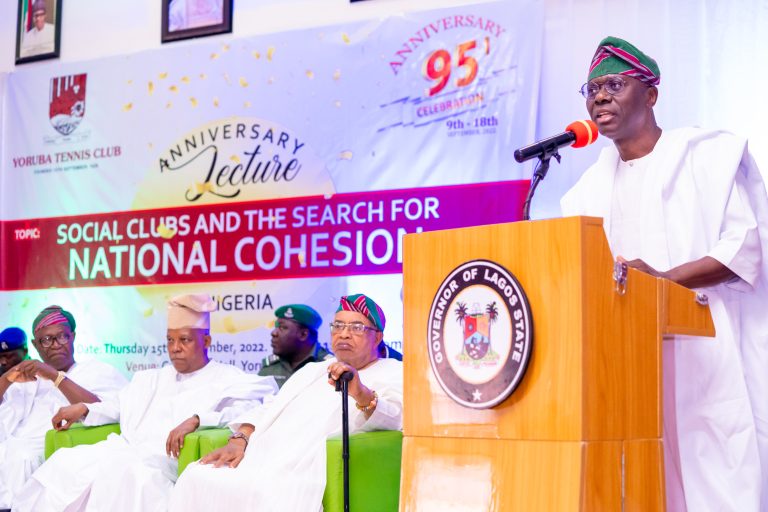 Governor Babajide Sanwo-Olu of Lagos State at the 96th Anniversary Lecture of the Yoruba Tennis Club, on the topic: “Social Club and the Search for National Cohesion” in Ikoyi on Thursday, urged Nigerians to ignore the Muslim-Muslim presidential ticket of the All Progressives Congress (APC) for the 2023 general elections. He covertly begged Nigerians for his political principal and APC presidential candidate, Asiwaju Bola Tinubu, seeking support for the 2023 elections.

The Lagos governor stated that the election of the next President of Nigeria should be about leadership, character, audacity to think and ability to think deep and solve problems.

“Tthe election of the right persons is not about religion, as there is nothing in the issue of a Muslim-Muslim Ticket of the APC Presidential candidacy.

“I am a Christian and my wife is a Christian but we know too well that it is not about religion.

“We have forgotten that in 2011, when Action Congress at that time gave a platform to Malam Nuhu Ribadu and his vice presidential candidate then was Mr. Fola Adeola.

“It was a joint Muslim-Muslim ticket and we did not see any problem at that time.

“But suddenly, because there is a likelihood of this ticket emerging as a winner, people now want to divide us. We will say no because that is not who we are.

“We do not want to despair other candidates. We all know too well what their antecedents are. We all know too what their credentials are. But we know that as a nation, we need a strong launch pad. We need to think out of the box and be able to put our best foot forward,” Sanwo-Olu declared.

The governor commended the leadership of the Yoruba Tennis Club for making the right choice of inviting the APC Vice Presidential candidate, Kashim Shettima, as the guest speaker.

“We are celebrating 96 years now and let it be on record that by 2026 during our centenary celebration, by the grace of God, we will have Asiwaju Bola Ahmed Tinubu coming here to celebrate as President on our centenary.

“By your grace and your support, I will still remain as your 15th Governor, coming here and celebrate in four years time and all of you will be here.

“We deserve the presidency. In Lagos we deserve it. Lagos requires it and it would be by the grace of God a bigger, better and stronger nation and state that all of you would be truly proud of to have been part of,” he said.

While delivering his lecture, Shettima said that there had been so much talk about the Muslim-Muslim ticket of the party.

Shettima said that Tinubu is a Muslim but his wife is not only a Christian, but a senior pastor of the Redeemed Christian Church of God, as well.

“Some of Asiwaju’s children are Christians. How can you convince someone that Asiwaju is going to Islamise Nigeria when he did not Islamise his own family,” Shettima argued.