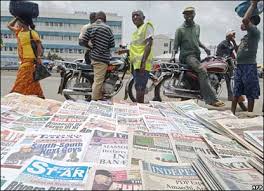 Why OBJ won’t allow dead Kasamu rest: A PDP stalwart and former Sen. Buruji Kasamu succumbed to the deathly grip of Covid-19 on Saturday. He was laid to rest on Sunday, amidst tributes across party lines. But barbs and missiles from his sworn enemy and former party leader ex-President Olusegun Obasanjo, who just tested for the infection, too, may not let Buruji rest in such perfect peace. Read more.

Reason for Man U to paint the town red: The sight of Sancho in UK especially in the company of two United fans, the rap duo Krept and Konan partying together, has delighted the Red Devils supporters across the world. Read more

Tension before the Edo election rising: APC national leader Bola Tinubu has put in his oar in the row preceding the September 19 election in Edo. He’s very, very partisan this time, despite the fact the embattled governor,  Godwin Obaseki, was once among the Lagos crowd, and the APC before he defected to the PDP. Tinubu’s vitriol is spreading fast, and nauseating many. Read more.