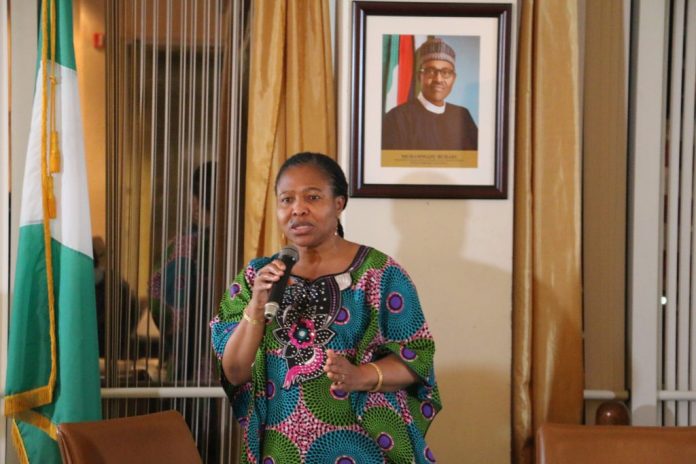 Nigerians in the West Coast of the U.S. have appealed to the Nigerian government to expedite action on its planned re-opening of the Consulate-General of Nigeria in San Francisco to alleviate their consular challenges.

The nationals, who made the appeal at a hybrid Town Hall meeting held at the Nigeria House in New York on Wednesday, appealed for the reopening of the mission to cater for consular services of the huge population of Nigerians residing in the West Coast.

The New York Correspondent of the News Agency of Nigeria reports that Nigerians living in the West Coast of US had consistently demanded for a mission to cater for their consular needs.

They bemoaned the situation whereby they travelled to faraway Atlanta, New York and Washington, DC, the current Nigerian missions that offer consular services in the US.

The permanent Secretary, Ministry of Foreign Affairs, Amb. Gabriel Aduda, had at a Town Hall meeting attended in New York in July said that plans to re-open the San Francisco mission had reached “an advanced stage“.

Responding to the appeal, Nigeria’s Ambassador to the US, Dr Uzoma Emenike, said the Nigerian government was committed to reopening the San Francisco Consulate to bring consular services closer to the huge Nigerian population resident in the West Coast.

Emenike was, however, not definite about when the consulate would be re-opened but said the process was the same as opening a new mission.

The Nigerian envoy said there were procedures to follow to re-open a mission, which included obtaining permission from the host country, just like opening a new mission.

In addition, she said opening the mission would also involve logistics, which the Nigerian government had been working on.

“Honestly, I understand your challenges in having to travel to New York, Washington DC and Atlanta for consular services.

“We will do our best to see that things change for the better,’’ the Nigerian ambassador assured the attendees.

The Nigerian government shut down the San Francisco, California, Consulate in 1989, however, the property is still owned by Nigeria.

Some officials of the Ministry of Foreign Affairs and members of the National Assembly Committees on Foreign Affairs had visited San Francisco in June for an on-the-spot assessment.

On the issue of getting refunds for double payments for passport from Innovate Passport Service, the outsourcing company for Nigerian passport, Emenike advised those affected to apply for refunds through its website.

“It is a simple process, talking from experience; just go to the website and send an e-mail, requesting for a refund of your payment and you will get it,’’ she said.

Similarly, the Consul-General in New York, Amb. Lot Egopija, said the consulate would continue to extend its intervention programme to more states under its jurisdiction.

Egopija said the consulate had successfully carried out an intervention programme in Chicago, urging nationals to commence the process of renewing their passports on time.

“We feel your pains; we will do everything possible to alleviate your pains. Again, we want to appeal to you to apply for renewal of your passport six months to the expiring date to avoid emergency,’’ he said.

On ways Nigerians whose passports had expired could embark on emergency travels to the homeland, Egopija advised such to apply for an Emergency Travel Certificate (ETC).

He explained that ETC allowed Nigerians to travel home even with expired passport, advising that such option could be checked with the airlines.

Egopija said that the consulate attends to about 100 applicants daily against the scheduled 60 applicants, assuring that any applicant who walked into the Consulate would be attended to.

In addition, he urged Nigerian nationals in the U.S. to check the website of the consulate: nigeriahouse.com for up-to-date information and desist from using the services of third parties.

He also appealed to those who had applied for passports before the COVID-19 lockdowns to come for their collection, saying “we have so many unclaimed passports”.