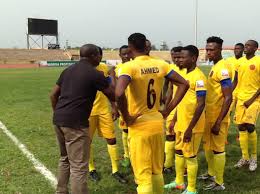 It is early days alright but from all looks of things, Anayo Offor has taken the role of Interim boss at Nnewi United, like a duck to water,National Daily learnt.

After the shocking and sudden departure of fan favorite Wilfred Udube, the Management of Anaedo Lions decided to keep faith with Offor who had been Udube’s Deputy this season, which has turned out to be a fantastic decision from the looks of things

Not only has Offor maintained the sleek brand of football United has come to be known for this season, he has secured 4 marvelous points from the first 2 games (Draw against Remo Stars and Win against Delta Force FC), albeit that the second match was nerve racking, the must important statistic remains the final scoreline.

With such results and displays weekly, Offor looks set to become a fan and club favorite

While it is too early to tell, one thing is clear: there is a positive arrogance and confidence in the United squad which can only bring about great performances both home and away as we have seen over the last 2 games

At this rate, it will be a huge surprise if United does not secure promotion in record time to the top tier of Nigeria Football.