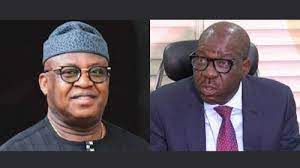 The Legacy Group of the Peoples Democratic Party (PDP) in Edo State led by Chief Dan Orbih has challenged Governor Godwin Obaseki over the new moves to overturn the judgment of Court of Appeal sitting in Benin City on Wednesday, 23rd November, 2022, on the Appeal filed by The Legacy PDP candidates against the judgement of The Federal High Court Benin delivered on the 27th of September, 2022 in favour of the Obaseki’s group.

A member of the PDP Legacy Group, Amb. Tony Okonigene, in a statement declared that the group stands on the appeal court judgement on November 23.

It was narrated that in the lead judgement delivered by Tunde Oyebamiji Awotoye JCA,  the 3 Justices struck out/set aside the judgement of the Federal High Court, Benin City, after declining jurisdiction due to the incomplete records of judgement transmitted to the Appeal Court.

Okonigene noted that the lawyers and some candidates of the Obaseki’s group who were in court, went on Television to praise the judgement and declared it as a victory for democracy and the will of God. They called on all PDP members to close rank and work for the victory of the PDP in the coming 2023 elections. Their supporters went partying all over, Okonigene recalled.

Okonigene, however, expressed concerns that in a surprise twist of events, the same Obaseki’s group, on Monday 28th November, approached the Justices of the appeal court to reverse and amend their judgement. According to him, “they claimed that their Lordships mistakenly struck out the High Court Benin judgement instead of the Appeal. More surprising, their Lordships actually called a meeting of the lawyers of both sides to consider this unholy request.”

Okonigene stated that unfortunately, the Legacy PDP candidates have long filed the notice of Appeal before the Supreme Court based on the letters of the certified true copies of the November 23rd judgement.

Okonigene declared: “in a display of desperation and confusion, the Obaseki’s group has gone ahead to file a motion with the Appeal Court  Justices for them to amend and change the judgement. This is an exercise in futility. Just as they held onto the incomplete records transmitted from the Federal High Court, the Legacy PDP candidates are holding onto the certified true copies of the November 23rd judgement.  On this judgement we stand.”